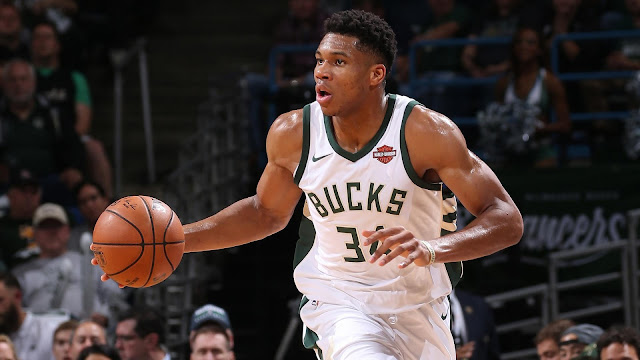 1. Steph Curry/Riley Morrison - This story was my favorite thing of this week (obviously, right?!). It actually might be one of my favorite stories in a while. Upset with Under Armour's Curry 5's not being available sizes for girls, Riley wrote Steph Curry an awesome letter, only for Steph to return with an awesome letter of his own, and a pretty cool gesture. Diversity efforts and super cool athletes - can't beat it. Love this story. Be sure to check it out.

2. Helpful Co-Workers - Maybe I'm getting in the holiday spirit because I'm all about these human effort stories this week. I really think there should be a Good News network on TV to balance out the garbage we often see. Nonetheless, here is a cool story that can restore your faith in humanity, even if you had a tough week.

3. Giannis Antetokounmpo - I watched a few of his games over the past two weeks, including this week against my Knicks and really got a hold for his game. Not just the highlights and hear-say sort of understanding, but really watching the dude play. After LeBron, Giannis might just be my favorite in the NBA to watch, and really, one of my favorite athletes in sports right now.

1. Kareem Hunt/NFL - There is so much wrong with this story. From Hunt's actions and decision making, to the NFL's "inability" to find the tape. This league's ethics is beyond comprehension and morality at this point. I obviously have given up my football fandom and interest a LONG time ago - but these stories continue to be disturbing.

2. General Motors Closes - The idea that many returned to work on Monday following the Thanksgiving holiday, only to be told they will no longer have a job is heart breaking. While GM is ending specific models of their cars, and closing down plants, their execs have profited through buybacks of stocks in the wake of the cutbacks. Such a shame, but you know, totally expected.

3. Life Expectancy - The life expectancy is now down for the first time in a long time here in the United States and it's due to suicide and drugs. We're in some tough times, especially when it comes to mental health. Unfortunately, the effects are now becoming quantitatively observant. Not good. Not good at all.

1. President Bush Legacy - It was sad to hear that President Bush passed away this weekend. It's always tough to see a man who at one point lead our country pass away. However, in the times we live, it was also VERY interesting to see some of the feedback on Bush's legacy not often discussed like his neglect of the black community, his role (or ignoring) of the AIDS epidemic, his role in the "war on drugs", and a few others during his tenure. I wasn't aware enough as a kid to understand his Presidency, so it's been truly interesting to see what his impact truly was with many willing to be honest and not sentimental or hyperbolic in Patriotism.