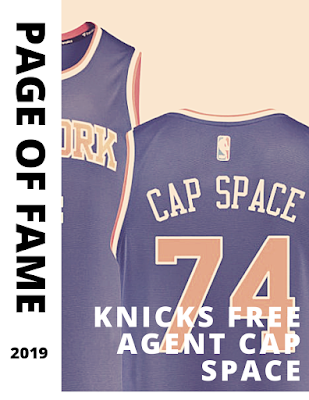 You knew this was coming. You had to, no? If you've been a reader of this blog, or you know me personally, you are well aware that I am (read: unfortunately) a fan of the New York Knicks. And with that fandom comes misery, disappointment, and of course, the proverbial false hope that is wrapped up in yes, free agent cap space.

Sure, there was that one summer back in 1996 (see how far back we have to go?) where the Knicks acquired Allan Houston and Chris Childs via free agency, then traded for Larry Johnson. What a summer...I'll hold it collectively in my heart.

Since then it's been two years of tanking and clearing cap space for LeBron James who decided to take his talents elsewhere. We got Amare Stoudemire, and unlike the narrative most media outlets portray, as a Knicks fan, I have nothing but love for STAT.

In 2015, we thought we had a shot at Kevin Durant and not only left us for the Golden State Warriors (the nerve), he never even granted us a meeting. We sign Joakhim Noah instead. Ugh. SMH.

And again we had plenty of cash in 2019, and well, the hype of "CAP SPACE" once again let us down. The likes of Julius Randle, Bobby Portis, and Marcus Morris are still up to be determined.

Regardless, the constant throws of Knicks Cap Space and it's ties to one day ending this Knicks misery of losing is now reached epic levels - to the point where I've realized I've wasted too much space on this blog dedicated to it's options, potential, and overall importance, that it MUST be considered for the DP Page of Fame.

So heres to you New York Knicks Free Agent Cap Space. I honestly have no idea what you mean, because you exist, but you know, we've never seen you mean anything else but just well - exist.

PS - We have insane cap flexibility for the next two years. Who should we sign?