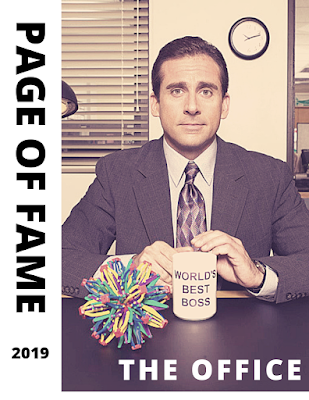 In 2018, my son was born. And as any first-time parent with a newborn quickly learns, there are a lot of sleepless nights, and plenty of hours of stationary, sedentary-ness, living as you await the next move in the weird chess game that is newborn vs. new parent.

For my wife and myself, we split the duties into shifts in order to get sleep as well as to keep our sanity, and with that, I earned the graveyard shift. After all, she did deliver a baby.

I'm not much of a TV watcher, and there are very few shows I can honestly say that I've been into, or even, watch consistently. However, life's rules were thrown out the window, and personal traits were torn to shreads during these initial weeks. Netflix quickly became my best friend.

After burning through some of the shows that are (were) on my radar such as Daredevil and Dear, White People, I ventured over to The Office and figured, huh, I hear it's funny, I guess I'll start from the Pilot.

9 Seasons of binge watching later, The Office is now one of my favorite things in life. Not only did it get me through those days and moments of caring for a newborn with laughter and providing a mental release, but it offered some pretty great lines in my toolkit to use in my everyday life. Yes, I can now join in on those references and jokes about The Office I've long missed.

You know what's even crazier? And this is not a lie. Whenever my son, now 1 year old, hears the opening jingle to The Office on the television, he stops what he is doing, looks up at the television, and claps with a smile! My wife and I find it cute. Though, at times, I wonder if I've somehow scarred my child. I wonder if the repetitive jingle in his formal years actually stayed with him. And why didn't Netflix stop me with one of their "Are you Still Watching..." warnings?!

Regardless, much love to The Office. Even if I never watch another episode again, I'll always have the summer of 2018, and all of those early months of learning (read: figuring out how) to be a Dad as the best reference to your greatness and importance.

Sadly, that jingle too, was the soundtrack to my entry to fatherhood. Go figure.