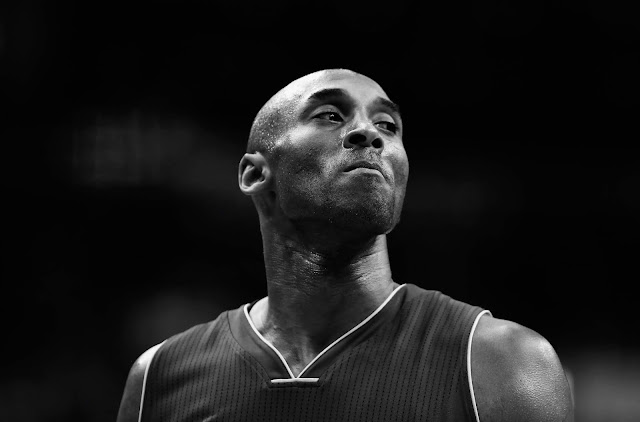 "Did you hear what happened to Kobe Bryant?", she said to me as I pushed my son on the swing.

I shook my head nodding no, wondering why this random lady suddenly has the disbelief she does on her face.

I gazed at her in shock, which then suddenly morphed into a sense of my own disbelief, with the slight reflection on my face that may have given away thoughts that this lady got taken by a celebrity hoax on Twitter.

"He did." she urged, almost trying to push me passed the stage of incredulousness.

I suddenly grabbed my phone, opened up Twitter, and there it was at the top of my screen: Kobe Bryant Dead at 41.

We would later learn the complete story and the details that came from the horrific crash, but it definitely is and will be one of those "where were you...?" moments, forever.

In the moment, my wife and I continued to chat with this mom, all of us staring at our children as we pushed them on the swings, all probably thinking the same vulnerable and deeply sympathetic thoughts, and having the same worrisome feelings - crushed for his wife and his daughters.

I won't claim to be the biggest Kobe Bryant fan. I couldn't stand when he came into Madison Square Garden and embarrassed my Knicks. But who doesn't do that, right? So, I won't pretend or become a prisoner of the unfortunate sensationalism that comes with celebrity deaths.

However, I thoroughly respected Kobe. And how could you not? He represented and inspired a generation - my generation. He was a beast. He was a champion. And yes, he torched my Knicks in ways that it uncovered deeply buried memories of MJ doing the same exact thing years earlier. The ultimate respect you possibly can pay to a basketball player.

And of course, there was that winter night of February 2nd, 2009, when I helplessly watched Kobe strike repeatedly on my guys in orange and blue to his Black Mamba namesake, going for 61 points in the Mecca.

There are also the little things - I still toss crumbled pieces of paper towards my garbage bins and muster an excitable "KOBE!!!" upon release. If you know what I'm talking about...you know just know. You're in that generation.

Just this week I thought about about Derek Jeter a lot, and how his career runs like a soundtrack as well as chapters my own life, in all of its forms and phases. I know what Derek Jeter means to New York City. And Kobe was that to Los Angeles. And to China. And in many ways, to various pockets of the basketball world. There are millions of people who feel that same way about Kobe, the way I do about Derek Jeter. Possibly even more.

But strangely, even in the heralds of his greatness for basketball, the work he did for the game, especially as an ambassador for the women's game, his representation of my generation, and his role in our culture, it is all secondary to what deeply saddens me in his loss.

While the world has lost a great talent and a once-in-a-generation athlete, it is the very thought of how fragile this race we called life is that spurs from his death.

Of course, now having a kid of my own, combined with maybe watching the demise of my own father, that part of this entire grieving - the fragility, the suddenness, the unexpectedness, the raw loss of life, all of it - comes on pretty strong.

It sounds awful, but when I read the tweet today from the Associated Press confirming that his daughter was aboard the plane, my heart collapsed. My throat became thick from the devastation. My mind went out to ALL of the families who suddenly became fatherless, motherless, without sibling, and without a friend.

I thought about the insane horror that must have been those parents clutching their kids as the helicopter plummeted back to earth, and what must've been running through their minds in those last moments.

Flawed like all of us, we're discussing a human who lived, excelled as one of the best to ever play the game of basketball, made millions of dollars doing so, is a global and cultural icon, devoted his life to giving back and mentoring others in the game, and on top of it all, was a great father, friend, and mentor. He had so much. Did so much. Gave so much. Meant so much.

And just like that...gone. Poof. On a Sunday afternoon.

It's truly sad. And again, as a father, it's scary. It's just so scary.