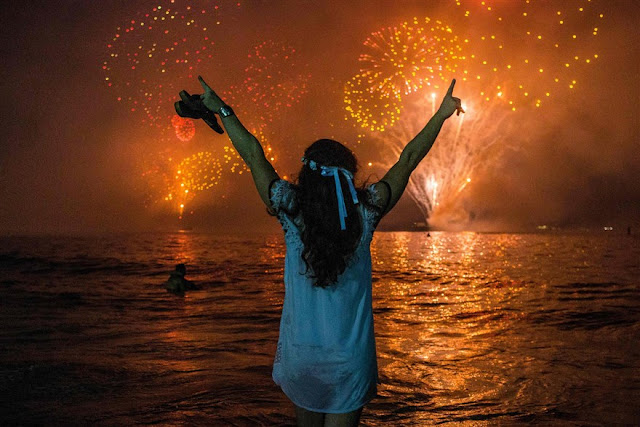 1. Happy New Year! - 2020 is upon us. I don't know why - maybe it's the start of a new decade, or the fact that 2020 sounds like something straight out of a sci-fi plot - but the new year sounds refreshing and cool. Regardless, 2020 is already stocked with an extra day in it, Impeachment hearings, the summer Olympics, and oh yeah, a Presidential election. And there is bound to be more. Here we go...

2. Jushin Thunder Liger - Many kudos to the legendary wrestler who wrapped up a historic career at the annual Wrestle Kingdom event in Tokyo, Japan. By the way, much props to New Japan Pro Wrestling for an absolutely amazing two days of pro wrestling. I'm telling you, we're not too far away from Wrestlemania following suit and becoming a multi-day event.

3. NFL Playoffs - WHAT?!?!?! Yes, yes. I watched some football this weekend, and quite frankly, I got lucky. There were some really good games on. But you know what? Even in taking a break from football over the past few years, and then watching games this weekend...the collisions and head injuries are still as cringe worthy.

1. United States-Iran Relationship - This is obviously the BIG story this week, especially since the murder of Iran General Soleimani may lead to war. He wasn't a good guy, and of course, this act will politicize the discussion - as is everything these days - but this isn't good. At all.

BTW - I would appreciate it if our President didn't tweet out threats against other nations...gotta be a better way, no?

2. Australian Wild Fires - While the world researches and reads up on Iranian-US relations, an entire continent is burning with little news coverage. Many prayers go up for the people in Australia dealing with these fires, and of course, the change of life that comes with it.

3. "When They See Us" Snub - I often don't get crazy about "Award Season", mainly because I'm always a year behind on all the good films. However, I have to ask this - how in the world did "When They See Us", or Ava DuVernay, not receive a nomination for a Golden Globe? Not one?!

1. David Stern and Don Larsen Pass Away - Two souls who had a large impact on the world of sports. RIP to both.