Thoughts on the 2020 Baseball Hall of Fame Ballot 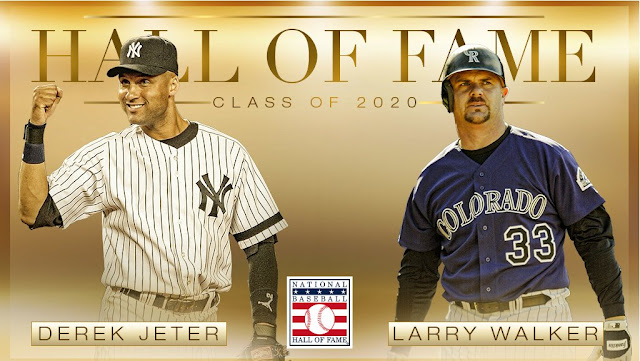 Derek Jeter is now in the Hall of Fame.

The thought is rather incredible to me that I've not only seen the entire storied career of this great shortstop and athlete, but now will watch him go into the Hall of Fame.

I can remember ALL of his highlights. All of the replays and images that are now replaying before my eyes, ripping open thoughts and memories of places, times, and feelings which ran parallel alongside my own life's developments.

All of them, along with the soundtracks of play calls and my own reactions in the moment, then, can easily be recited word for word and reenacted move for move, raising goosebumps on my arms, and cracking a smirk on my face.

Is that I sit here typing this post wondering how I will describe Derek Jeter to my son one day. And of course, pondering about the future Yankee who will come along in his lifetime that he'll be able to grow alongside with.

That's what Jeter means to me - consistency and greatness. And even after 20 +years, it's still hard to believe that it's been this long. That his career has been there this whole entire time - year in, and year out.

And while I romanticize about Jeter, there is also Larry Walker.

As Walker jokingly (and accurately) put it on his MLB Network interview, he's the B-Side on a record, in which the hit single is featured on the A-Side.

Despite the hilariously humbling joke, Walker represents everything that is the growth of baseball. A Canadian learning the game. A dude that simply mashed every step of the way, and now, can give legitimacy to what was once an industry-wide career handicap in terms of legacy and forever, in that of Coors Field.

Here are some other quick thoughts on this year's Hall of Fame Ballot:

For the record, these were my final thoughts from last year's Baseball Hall of Fame Ballot:

And finally...
With the "unanimous" seal broken, what are the chances Derek Jeter doesn't become the second person in 2020?
Of course, it only takes one guy...only one.

It's unfortunate that this will somehow become attached to Jeter's induction. One person - ONE! PERSON! - decided to not vote for Derek Jeter to become a member of the National Baseball Hall of Fame. ONE! SINGLE! CLOWN OF A PERSON!

After all, the history of these things rendered the likes of so many greats who fell short in attaining 100% approval for the Hall of Fame. Griffey. Ripken. Gwynn. Maddux. Just to name a few in modern times. All who should have been recent no-doubters, in fact had voters who doubted the relevance of their ability.

But then again, Jackie Robinson got into the HOF on 77% of the vote. Think about THAT one.

Regardless, Jeets is going where he deserves to be, and that is all that matters.

By the way, I believe the next player to have a real shot at earning a unanimous vote is that of Ichiro Suzuki. We'll see in about five years.

Coming in at just over 70% is Curt Schilling on this ballot. And if projections, educated guesses, and recent voting (Mike Mussina?) serve as a foreshadow for 2021, Schilling should be on his way in next year.

While Schilling is well...ummm, a special kind of a human being when it comes to his personality, his politics, and his investments, as a baseball player, I really believe he is a Hall of Famer.

Can't wait to hear about the damn bloody sock lore next year. And yes, that was super sarcasm.

So, what's the deal here, collectively? Are we making them both sweat it out until the final year? And if that's the case, having them both go in together surely is going to make for an interesting induction ceremony.

Of course, if this is the plan.

And one more thing, as we now enter the age of technology cheating, if we're evaluating the PED era for the HOF, David Ortiz's support should be interesting once he gets on the ballot.

Todd Helton is going to definitely benefit from this new found pivoting away from the utterly stupid unfortunate stigma that is players who played a large amount of time at Coors Field not being taken seriously.

With each passing year, the more it looks like a path is being cleared for Omar Vizquel and Scott Rolen to make a run at immortality.

However, I'm still torn on them being super great, and whether they surpass that threshold into the really elite.

Speaking of making decisions on the elite, am I the only one who finds the case for Gary Sheffield not getting enough publicity? I'm not saying he's a definite, but Sheffield, in my opinion (of course), is closer than Vizquel and Rolen, no? Seriously, everyone, dig into Sheff's career. He's very underrated.

Why no love for Jeff Kent? Like, for real?

We have Brad Penny and Raul Ibanez out here receiving Hall of Fame votes, and Jeff Kent is struggling to crack 30%.

We've gotten to a point in sports wherever everyone wants to be the smartest person in the room to go against the grain. Have we lost our ability to simply just watch and appreciate greatness - and call it is as such?