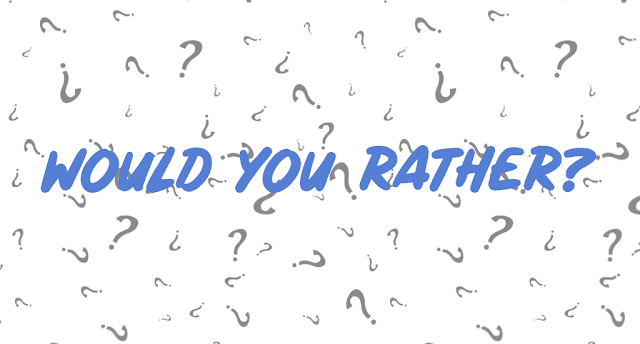 101. Would you rather go through life as Steve Bartman or Scott Norwood?

While Steve Bartman somehow was let off the hook, that dude literally had to go into hiding following the 2003 NLCS. I'm going Norwood here.

102. Would you rather only have Joel Embiid on the court or on social media?

103. Would you rather be a great player with a trashed legacy or be a good player that few will remember?

In no way do I want to be Roger Clemens or Barry Bonds. Trashed legacies last forever and are brought up constantly in a negative light. I prefer to be that athlete people randomly bring up to make a positive point in a debate. Hey, you remember....yeah, that guy was good. Sooooo underrated!

104. Would you rather listen to Mike Francesa or Stephen A. Smith for 8-hours straight?

Good grief, either way, I'm in for pain. I'll go with Francesa. While he's outright arrogant and really has limited knowledge on what he is talking about, the caricature of Francesa - a big reason on why he is famous, is hilarious to listen to. Stephen A.'s yelling gets tiring fast.

105. Would you rather have Johnny Manziel or Yasiel Puig as your teammate?

Give me Puig. He shows up, and at times, can help your team win. Not sure Manziel has done that since becoming a pro.

106. Would you rather take one punch by an in-his-prime Mike Tyson, or 30-seconds (no stoppage) in the Octagon with Brock Lesnar?

I want to do the one punch and get it over with, but Tyson could leave permanent brain damage. I'm going 30-seconds with The Beast, and I'll run around, before getting caught, and quickly taking my blows curled up against the cage while praying that the longest 30 seconds of my life ends.

107. Would you rather try to tackle Marshawn Lynch or try to hit a Clayton Kershaw curveball?

Kershaw curveball all day. That would be fun, and provides some bragging rights. I have no interest in tackling anyone, much less a dude like Marshawn Lynch. No thank you.

108. Would you rather have a career like Robert Horry or Charles Barkley?

Yikes. I hate to say this, but Robert Horry. I don't give into the pressure of having to win a title we place on NBA players these days, but Horry had it good! 7 titles, and some big shots en route to them all. I've never been a dominant athlete in any level, always a role player. I can relate and identify with that role. Give me Big Shot Rob.

109. Would you rather stand on the mound at Yankee Stadium, or hit a jumpshot on the floor of Madison Square Garden?

Both are awesome. But nothing beats the mound at Yankee Stadium (old and/or new).

110. Would you rather have your child be drafted by your favorite team's rival, or follow a sport of un-interest for a full-year?

This is easy. I couldn't follow golf or NASCAR, for an entire year. That would really be enjoyable. If my son were to be drafted and then play for the Boston Red Sox, I would be cool with that. At that point, I would root for the Red Sox...you know, temporarily.