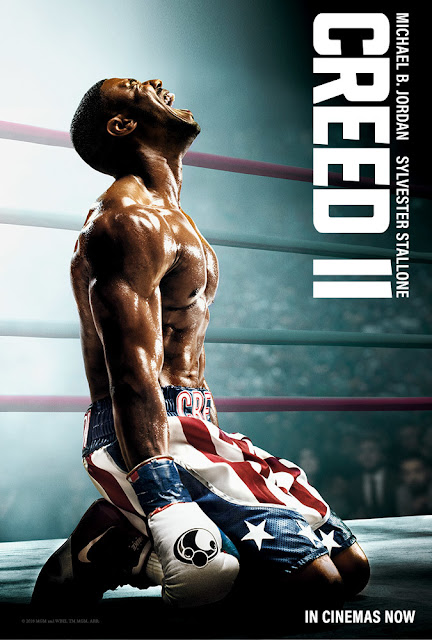 Under the tutelage of Rocky Balboa, Creed faces the biggest challenge of his career when he meets Viktor Drago, son of Ivan Drago.

Creed goes to the home of Rocky to get his blessing on the fight against Viktor Drago. After going back and forth, Creed eventually hits him with a crushing comeback referring to Balboa never throwing in the towel in the fight that saw Apollo Creed, his father, die.

"I was afraid of not being able to do what he couldn't do."

I have to admit, when Creed II was announced, I rolled my eyes. I just thought the plot was one that was too cheesy, too obvious, and really, something that wouldn't allow the Creed series to separate itself from that of the famed Rocky franchise.

Creed II was VERY enjoyable. And where it shines was its ability to tie the fabric of both franchises nicely, while also giving depth to so many of the characters involved in the overarching story. Kudos to those who worked on the screenplay - phenomenal.

Creed II did not insult you in the way we've seen other long-run franchises such as Fast and Furious have over the years. The plot was deep, airtight, creative, and even leaves room for a Creed III involving many of the same characters. I absolutely loved the backstory of what happened to Drago and his son, and the reasoning for them wanting to fight Creed. It was bigger than the obvious, it meant so much more for them. And the same goes for Creed - going into the film you expected the obvious revenge factor, but the fight really had nothing to do with his dad and was more about Creed himself. Again, brilliant.

Also not to be lost is Rocky Balboa, himself, who has evolved into a deep character that really does ooz the 40-plus years of trauma and experience we've shared with him along the way.

And by the way, Phylicia Rashaad is easily one of acting's greatest treasures who never gets her due.

All in all, I LOVED Creed II. And I'm definitely looking forward to the third installment. Check it out - highly recommended. (Watch Rocky IV first, though!)