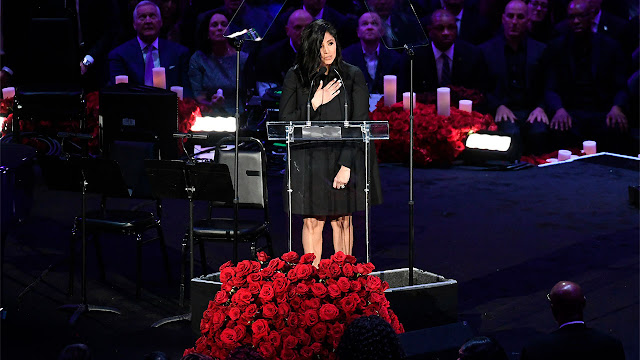 1. Vanessa Bryant - The tribute for Kobe Bryant was absolutely moving. Michael Jordan, Shaquille O'Neal, Sabrina Ionescu, and others - were so great with their words and in the moment. But none were that of Vanessa Bryant's speech. How she managed to get through her beautiful words was the kind of strength only God can give. Her courage, tenacity, and poise - in all that she has experienced, and continues to go through - was and continues to be, incredible.

2. Sabrina Ionescu - She is the best-kept secret in all of sports, and quite frankly, it is a shame. However, the word is beginning to leak of Ionescu's greatness as she finished her senior season at Oregon as the only player - Male or Female - to have recorded 2,000 points, 1,000 rebounds, and 1000 assists. Naturally, she also finished with the most triple-doubles in NCAA history as well. The New York Liberty, playing right down the road here in Brooklyn this season, has the first pick in the upcoming WNBA Draft. They better take Ionescu. And if they do, I'll be there throughout the summer.

3. Jessica Margulies - Major props to Margulies, who leads a boxing program for children on the Autistic spectrum, called - what else? - The Spectrum Bout. Her story and work is an inspiring one that should get some props.

1. Coronavirus - Things have definitely gotten more serious, especially here at home in the United States. I feel like our government isn't as prepared for this as others around the world have been. Regardless, we are at the stage where another infection/diagnosis pops up in a new region across the world every few hours. Be safe ya'll. Wash your hands, and of course, avoid touching your face.

3. The Arrest of a 6-Year Old Student - It has to be said - if this little girl were white, in no way would she be dragged out of a school in handcuffs and treated the way she was. We see this across statistics throughout education in regards to many of the various gaps in education, and here it is, once again in action. Though, it was nice to see that the officer who engaged in this despicable act was terminated. That is so rare, that it is shocking to digest, to be honest.

1. Shared Photos of Kobe's Death - The fact that there are now leaked photos of the bodies from last month's tragic helicopter crash, including Kobe and Gigi Bryant, is disgusting. Shame on the officers involved. Where is the dignity?