Back to Mic Skills, Back to Basics 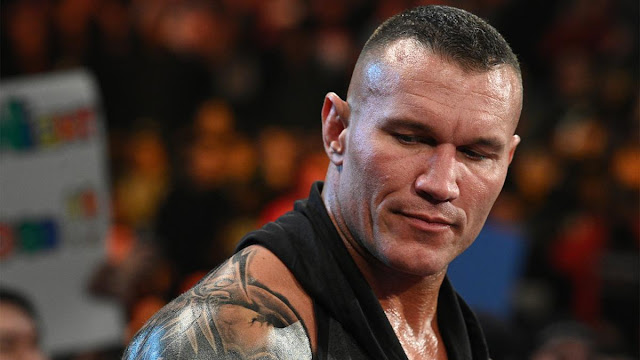 The art of the promo is once again becoming a prominent factor within pro wrestling in 2020.

In a world in which we are witnessing pro wrestling offer and deliver various products, styles, and presentations for the fan to choose, what we are seeing is indeed a slow return and focus on promo delivery, effectiveness, and overall, character and storyline progression.

This of course, is a sudden change after years of the trend being on in-ring work. Many companies, such as NJPW, became en vogue, and the internet and it's anti-establishment narrative, placed a focus on in-ring performance, great matches, and overall skill above everything else. Over the last decade, the era of flips, dives, athleticism, and dramatic false finishes pushed the industry away from the pomp and circumstance of characters and mic talent.

Fans, wrapped up in the nuance of website ranking; match of the year lists; and star ratings - ushered in what eventually became the norm throughout the industry in wrestling style and presentation.

And in the land of the WWE, overly scripted promos in a unique move, were the go-to - pushing tmic skills from a developed artform, into generic and soulless memorization.

But here we are, it's 2020, and the microphone is where some of the best things in pro wrestling is happening right now...at least in my opinion. I get it, we all have our likes and dislikes. Yet, as the business continues to speed up, slowing down, and getting back to basics is standing out. And it is the men and women who can captivate on the mic, in front of a camera, can move storylines, and sway crowds organically, who are the must-watch talents in the industry right now. 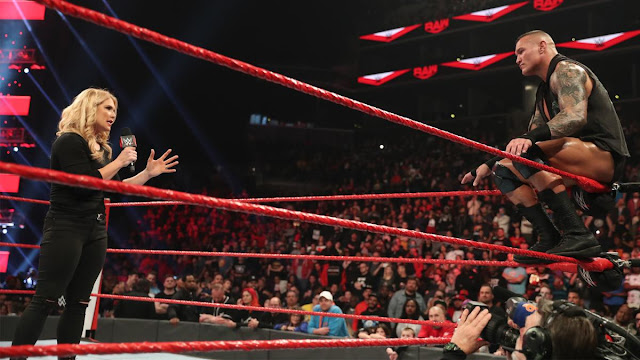 Randy Orton may go down as one of the greatest ever. Many will, of course, disagree with that - and you, of course, can do so. I'm sure you already have done so. However, Orton's smoothness in the ring is undeniable. His athleticism is and longevity surely makes him Hall of Fame worthy. But, Orton's in-ring promo work is vastly underrated or at the least, under-appreciated.

His recent program with Edge, as of this post, is my favorite thing in pro wrestling. Everything about the program has been fire - from Edge's return at the Royal Rumble, right through the RKO the following night on Raw - all of it has been must-see.

However, what has truly made this program so special is, in fact, Orton's in-ring promos that have up the ante on his "apex predator" persona. The awesome back-and-forth with Beth Phoenix that we witnessed this past Monday, easily made this fued the most anticipated match at Wrestlemania.

Orton's patience in his promos, his ability to make you believe that he is wrestling with feelings and thoughts, and mannerisms of pacing and/or sitting while wrestling with thoughts, easily leaves the viewer wanting more, and of course, feeling like there was more to the story. And of course, there was and is. The explanation of wanting to protect Edge from himself is a great storyline that Orton fantastically got over, and not before Orton took things to another level of awkward perverseness in telling Beth "I Love Edge more than you do".

He's the villain who has such a maniacal, yet, understandable mission, that it does make you understand their reasoning for what they are doing.

Of course, Edge is a great promo as well, always has been, and his return this week surely should wave the flames on this one. 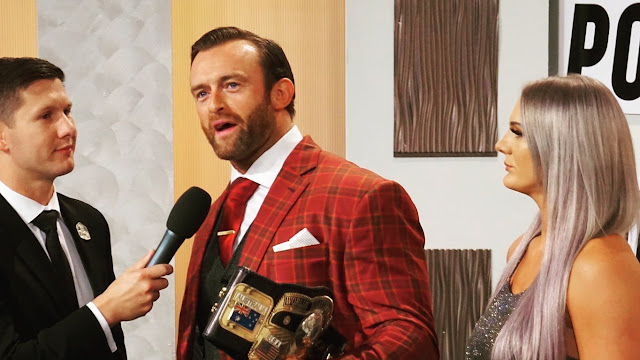 It is no secret that I have become a HUGE fan of the current National Wrestling Alliance. My main reason for my NWA fandom is indeed its return to old school wrestling, and that includes a heavy reliance on the promo. Quite frankly, if you can't talk, there isn't a place for you in the NWA.

All of the storylines are driven from the in-studio booth or through previously taped talking segments. Heck, they even have a new show based around evaluating prospectus talent on the mic and the ring called, The Circle Squared.

But it's a few guys who have been on-fire with the microphone in their hands.

You have to begin with the Worlds Heavyweight Champion, Nick Aldis, who resonates everything that is old school World Champion. It is obvious that Aldis spends time working on his verbal craft by studying many of the greats in the industry. From his timely pauses, his quick-witted comments, right down to the way he folds his belt on the podium, or sometimes, gives a twirl before the camera - Aldis is separating himself as one of the industry's top guys.

There are many top promo guys in the NWA such as Eli Drake, The Pope, Aron Stevens, and even Tim Storm, who I've come to appreciate.

But there is one particular program in the NWA I did want to highlight, and that is the feud between The Pope and Eddie Kingston. Much like Orton/Edge right now, these two have barely interacted physically, and yet, you can't wait to see Eddie Kingston get his hands on Pope. Both have delivered the goods at the podium inside of the NWA arena. However, it was a specific promo that really moved the program into that super gear.

What's special about Eddie Kingston's style is that it is original, it is organic, and it's so damn believable (because most of it is probably true!).

Of course, that is just a small taste of the promo. I advise you to check out episode 17 of the NWA Powerrr. Kingston's promo will leave have your eyes wide open like the eyeball emoji.

ONE OF THE GREATEST OF ALL-TIME 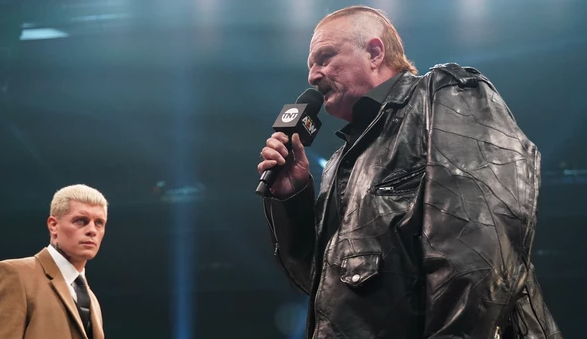 And finally, there is AEW. Look, the kind of programs Cody has been involved in since the company started have all landed heavily - no one is doing emotional storytelling like Cody in 2020.

But...with the awesome mic work that was him and MJF leading into AEW Revolution, it was that of Jake "The Snake" Roberts' return to pro wrestling that had (and has) me pumped.

Roberts has a tremendous mind for pro wrestling, and all you need to do is watch ANY of his promos during his prime run in the old WWF. Roberts was a mastermind in delivering words, and the beauty of it was that he didn't need to yell, talk in a formulaic cadence (which so many wrestlers engage in today), or use catchy phrases. Roberts was all intellect. And even now at 64 years of age, and having just returned after more than 20 years away from pro wrestling, Roberts returned on AEW Dynamite and nailed a masterpiece that many of today's wrestlers could only dream of.

And yes, the aura was still there.


🎤 @JakeSnakeDDT with a warning for @CodyRhodes and all of #AEW 😱#AEWDynamite pic.twitter.com/V9n6Xo02xM
— All Elite Wrestling on TNT (@AEWonTNT) March 5, 2020

I won't dare speak for ALL pro wrestling fans on what is the hottest thing going right now - after all, I really dislike when wrestling fans do that.

However, for me, its all of the above mentioned, and the re-focus on promos is surely not coincidental. There is just something amazing - just, on another level - about a pro wrestler who can handle a microphone, and make you feel all sorts of things outside of the ring.

I'm glad we're once again moving back to those core values. In a world where 630 flips, suicide dives, and springboard moves are common, it is the microphone that is making wrestlers special.

And I love it.