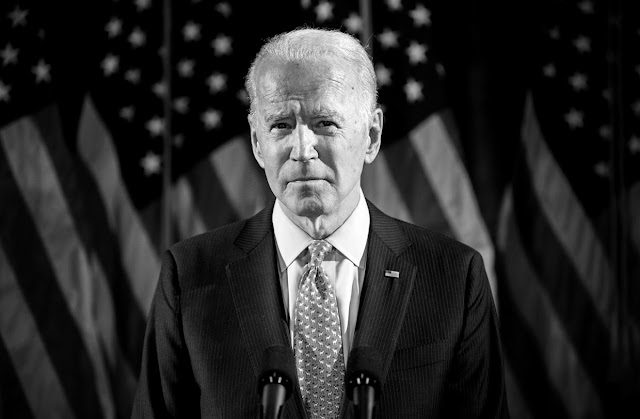 If three words can derail a campaign, that would be them for Joe Biden. Three words he didn't even have to say. Three words he can't walk back. And three words that have opened up an entire pandora's box worth of feelings, insight, experience, thoughts, and movement for many people.

All it took, was three words.

As someone of mixed-identity growing up in majority-black environments during my life, the idea of "You Ain't Black" is a tricky one in comprehension on all fronts. I've heard it a few times, and really, it calls on the carpet the entire notion of what "black" should be, and really, if people of color as a whole are stigmatized by the damages of these three words.

It locks an entire being into one idealistic form of what "being black" should be, should look like, and should feel like. I've witnessed white people say it to me, ironically, filling that void as an individual with the darkest skin tone they've ever encountered, thus, qualifying as "black" (of course). You don't seem "black". You don't act "black". Essentially triggering, "You ain't black".

But despite all of that baggage, somehow, the term is also used in a joking manner. Again, I've been around it, and often, my parents have used it in similar ways regarding our own culture. "You nah West Indian bwoy!! Any first-generation American child of a Caribbean household can fill in one of the hundreds of reasons why this would be brought up.

So yeah, I get where former Vice President Biden,  a white man, who is using his ties to the first black President in the United States to maybe - possibly? - over relate to the black community for their vote in him. He said it in a joking manner on a popular morning show hosted by people of color, with an overwhelming audience of color.

However, despite the exclusiveness that is the phrase, those three words still have great effects for many on many fronts for a few reasons:

I very much dislike identity politics. There is nothing more imprisoning of the mind and soul than a person voting a specific way tying it to perceived allegiances of their own identity. Evangelicals/Catholics voting republicans is probably the largest for me. Claiming "Pro-life" on matters pertaining to abortion, but suddenly being absent on allyship for equality, speaking up on the sins of the Catholic church, and having moral ground on "country and immigration" is a peak example for myself. Again, just me.

Being black and voting Democrat is probably 1A. For too long, it is looked at as Democrats are for the poor, and thus, blacks must be in support of the working, blue-collar agenda. However, if you've looked at policy-making dating back twenty years, there have been plenty of "blue" decision-makers who have done more damage - intentionally - than the perceived political platform would lead you to believe.

Unfortunately, the black vote - whenever it isn't suppressed - has been taken advantage of.

The same can be said with the current Trump Presidency. Through all of the madness, it has been interesting to see hardcore Republicans stay silent on issues they don't agree with, for the sake of the overall party agenda or, just being republican. Republican-ism definitely looks different today, and there are still many who will reluctantly stay the course, because, well...they're team Red.

Emancipate yourself from mental slavery, non but ourselves can free our minds. - Bob Marley

BLOW UP THE POLITICAL SPACE

I expect this Presidential campaign to get VERY nasty, and quite frankly, VERY ridiculous. And that's so unfortunate on the heels of everything that has been 2020 thus far.

With that said, the comment raises an interesting question - is there a movement to simply "beat Trump", or really one to get the best person in the White House? For me personally, I see this election as shaping up very similar to 2016 - who is the worst candidate of the two choices? In 2016, I didn't trust Donald Trump at all, yet, was willing to hope for the best. I'm not anywhere close to that in 2020.

However, I don't want to simply vote on the merit of "beating Trump". And if that is the goal, I think collectively as a nation we've won with no change. And for the black community, once again, it's an abuse of the trust in their vote. Personally, I really want to avoid that trap of "anybody but Trump."

...And that’s people staying home on election day because they aren't enthused by the candidate. You can’t act like this is the most important election ever but run a campaign from your basement and not make some real policy commitments to the black community and not listen to some of the demands that the black community are making. I think people are sitting around hoping that Trump loses instead of going out there and actually beating him. - Charlamagne Tha God (on Joe Biden)

91% of blacks voted for Hilary Clinton (or against Trump, however you look at it) in 2016 which made up a share of 10 electorates (the electorate college, the biggest bullshit system for voting there ever was). The black people I've experienced offer their political opinions, typically discuss President Trump in a manner that is likened to an establishment that doesn't belong to them. It's interesting to note, and sad in the same manner. And for those who did indeed punch their ticket for the President, their reasons are wrapped up in seeking "radical change" in the form of a non-politician changing the ground of political policy-making and structure, turning Washington on its side if you will.

The overwhelming truth is this, there is immense power in the black vote in 2020. We saw it's measure in 2008, and again in 2012. And we once again saw what a motivated base can do during the mid-term elections in 2018.

If there is anything that can be taken away from the Trump Presidency, it's that the entire political space needs to be blown up. All of it.

And finally, the most fascinating thing for me is this - the super sudden allyship for black voices and black care that is now being seen, heard, and witnessed from both sides of the aisle. There is something to be said when the likes of many (white) political talking heads, who have been on record of opposition for Black Lives Matter initiatives and other items on the black agenda, suddenly discussing the "outrage" that those three words are for the black community.

It is indeed so incredibly comical, and yes, just as insulting, to hear, see, and read discussions on which party "has done more for the black community".

Off of the heels of Ahmaud Arbery, Breanna Taylor, and a global pandemic that has further destroyed communities of color, the sudden interest in black feelings and outrage is disingenuous as best.

Honestly, miss me with all of that.

The bottom line is this, it amazes me that we can still have lengthy discussions about race, oppression, and the stigmatizing of a people, yet, never - EVER, get to the root of the problem(s) within America.

Those three words may have been damaging, but as we march towards November, what choice is there for the black community?