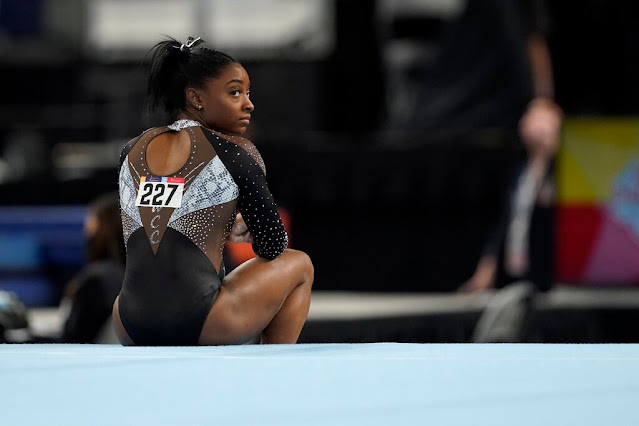 1. U.S. Shipping Surplus Vaccines Abroad - Amazingly, Americans are debating the value of a vaccine to help stop a global pandemic that has crippled our way of life, while there are still supreme shortages throughout the world as the virus rages on. With that said, I outright applaud this effort to begin shipping surplus vaccines abroad to the countries and regions that desperately need the assistance.

2. Simone Biles - Biles won a record seventh United States Gymnastics Championship and should be stated - are we talking this once-in-a-generation athlete for granted? Biles is awesome and continues to do things in the sport that have never been seen, done, or accomplished. Here's to hoping this national treasure keeps crushin' it.

3. Vanessa Bryant - Vanessa Bryant is a boss - and honestly, she needs to be to protect the legacy and likeness of her late husband. I can't imagine what it must feel like to see a shoe that YOU designed for your late daughter, and haven't given permission to anyone to use, produced for sale. Kudos to Mrs. Bryant for calling out and standing up to Nike.

And oh yeah, she's also battling LA County to get justice for the officers who leaked images of the deceased bodies in that crash.

That lady has some serious strength - God Bless her.

1. Burkina Faso - Evil carries on in this world as the African terrorist group killed over 100 people this weekend. The story of course received very little coverage in our news cycle, but that has become the norm here in the West. Utterly sad news...

2. NFL "Race Norming" - Speaking of another story that has not been explored enough (probably out of fear of bothering "The Shield") - how is THIS story not major news? This "Race Norming" is not a policy established a long time ago, it was done in the 1990s!!! The NFL believes that black people are not as smart as white counterparts, therefore equal damage for long-term head injuries cannot be measured?

So the NFL is ending the practiced policy now and will review black claims - ain't that great.

3. California Gun Law - After 35 years, a judge overturned a ban on assault rifles allowing AR-15's to be once again purchased. The ruling compared the automatic rifle to get this, a swiss army knife. While this is easy to get mad at, I just desperately feel for the parents of those who lost kids to school shootings where assault rifles were used. I cannot begin to imagine how infuriating this decision makes them.

Naomi Osaka - Regardless of your stance on Osaka's actions this week, I find the conversation around media access to athletes interesting. Even one that should be reviewed not in the sense of removing access, but in making access a more fruitful endeavor for all sides.

2. Mayweather vs. Paul - I won't knock what went down tonight in this exhibition match (is that even what you describe this as). Mayweather and Paul made their money - kudos to them. People apparently paid for this - that in itself is a headscratcher. Nonetheless, I just have to shake my head at what the sport of boxing has become. I sound like an old man, but is this really what the sport should be known for?