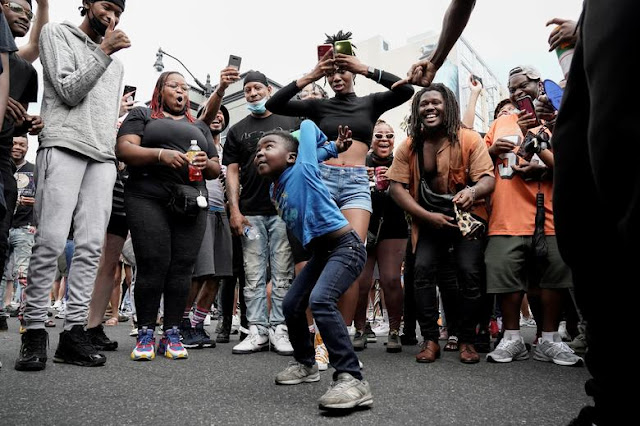 2. Juneteenth Federal Holiday - Well, the unofficial celebration that has been known within a black culture is now a federal holiday. Despite the classic American debacle of granting a new day for federal observance while said holiday is not allowed to be taught in several states,  we'll stay positive. After all, the establishment is not the end goal, just part of the process. And of course, it is a serious step forward. Regardless, I hope you had a chance to reflect on the day this past week.

3. Rachel Scott Gutsy Question - Yoooooooo!!!!! So much kudos to ABC News' Rachel Scott. She stood up, looked Vladimir Putin dead in the eye after her substantial preface, and said, "What are you afraid of?" Go ahead, Rachel! Go on with yo bad self.

1. Violence in America - Another weekend and another rising tally of gun violence, mass shootings, and even for ridiculous videos of fans fighting over sports fandom. The "Suns in 4" guy deserves some props for whooping that guy's ass after attempting to sucker punch him, but my gosh, what is wrong with us?

2. Delta Coronavirus Variant - Ah yes, right when we start to get back to normal life, this news of a new variant of the Coronavirus that is easier to transmit and more severe is making itself at home right now in England. Ugh. Please go get vaccinated, everyone. Please.

3. Baseball Culture - Baseball I love you. But you are in a VERY interesting period where much of your past and culture is flooding to the surface. There are chaotic on-the-field topics such as "sticky stuff" on the baseballs, players starting on second base, analytics, and many others to weigh. But there are also other rampant issues such as what we've seen from Jared Porter and Mickey Calloway. And now, there is the story of Kat O'Brien in a recent Op-Ed for the New York Times openly discussing her rape by a Major Leaguer while on the beat. Baseball - you have to be better.

1. (Project) Regional High School No. 1 -  This project is really cool. Dr. Dre and Music mogul, Jimmy Iovine has received approval for a public - PUBLIC! - school to be created in East LA that will focus and prepare kids what "they're interested in". The concept is not new but breaks the mold of traditional education which is excited and interesting in so many ways. Again, this isn't a private or charter school - I recommend definitely reading into this.

2. Jacob deGrom - This guy is having a season unlike we've seen before. deGrom has more RBI than he has allowed earned runs. Uhhhhhhhh, what?!?!?! For me, it's easy - best pitcher on the planet.

3. Kevin Durant - It's easy to dislike Kevin Durant. His Twitter. His choice to join the Warriors. Whatever. His play in the series against the Bucks is one of the most amazing performances I've ever seen in the NBA. He left it all on the court. You just gotta respect that guy.

Frank Wheeler dances as people celebrate Juneteenth, which commemorates the end of slavery in Texas, two years after the 1863 Emancipation Proclamation freed slaves elsewhere in the United States, in Washington, D.C.