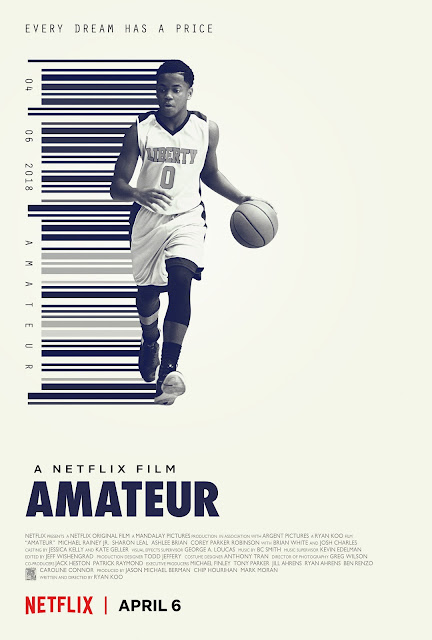 The recruiting and exploitation of a teenage basketball phenom expose the immoral undercurrent world of amateur sports and business.

After concerns about her son's education, Coach Gaines gives Nia the truth about the reality of amateur and collegiate sports while staring at the stadium.

"That stadium...and the tournaments, everyone else makes money off the backs of these kids. They're the reason for all of this, even to help the trust-fund babies so they can play lacrosse."

Amateur is a film that resonated with me. As an Athletic Director at the Collegiate level, it's a film that discusses the all-too-real occurrences of what is happening at the undercurrent levels in High School, Prep Schools, and on the "Brand" circuit, or the AAU scene. Amateur takes on the realities and dark corners of the journey for those looking to make it, and the majority who don't.

Amateur does a nice job of taking on some of these topics, especially in discussing the pipelines for kids through these fake schools, allegiances, and partnerships. The film also doesn't tackle the issue but does approach the issue of Vince, a battered football player dealing with CTE issues after the game has left him with nothing but dreams.

A favorite of mine is the character of Coach Gaines - a good guy who cares about kids but understands he has to work within the crooked system in order to succeed and to help.

The film isn't perfect. It suffers from not going further enough in-depth on the issues. It also has a very hokey ending that sheds light on the difference between American and International structures - but gives the story an unreasonable ending.

Nonetheless, without giving up anything further, Amateur does what it's supposed to do - provoke thought.