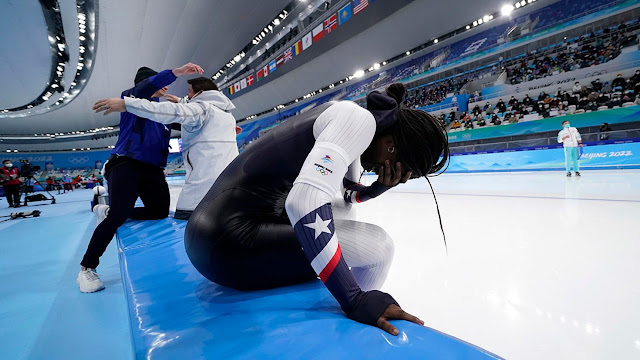 1. Erin Jackson - Jackson is the first black female athlete to ever - EVER! - win any kind of speedskating medal at the US Winter Olympics. There's no need to get into the background of specifics sports and why firsts like this are still happening in 2022, but more so, just living in the moment and appreciating everything Erin Jackson just pulled off. Much props!

2. Super Bowl Staff and Crew - Everyone talks about the game and the halftime show, and thus, they should. The sport manager and athletics professional in me appreciates everything else that goes into it. Yes, I'm the nerd that loves the planning, logistics, execution, coordinating, and more - kudos to the planning committee, to the crew that executed a flawless stage set-up and demo in minutes, to clean up crews, well...you get the point.

By the way, I very much want to visit SoFi stadium - the place looks awesome.

3. LeBron James Commercial - Am I the only one that's felt that Super Bowl commercials have lost their appeal over the last few years? However, the commercial with young LeBron and Current LeBron in his childhood bedroom was easily my favorite, and absolutely amazing.

1. Canadian Truckers Convoy - Just when you think we're all messed up here in the States, the protests occurring in Canada in blocking the border have reached drastic levels of concern. What was once protests about mandates, is now affecting the national economy, jobs, safety, and so much more. COVID has done some damage to the human psyche.

2. Electricity Inflation - Inflation continues to be an issue around the country. For those who live in NYC, or know of someone living in NYC, the recent spikes in electricity bills are a slice of that. Seriously, Con Edison, what the heck?

3. James Harden - Great player, but the era of the NBA star forcing his way to places due to being disgruntled has now jumped the shark.

Erin Jackson of the United States reacts as coach Ryan Shimabukuro hugs teammates after winning the gold medal in the women's speedskating 500-meter race at the 2022 Winter Olympics, Sunday, Feb. 13, 2022, in Beijing.