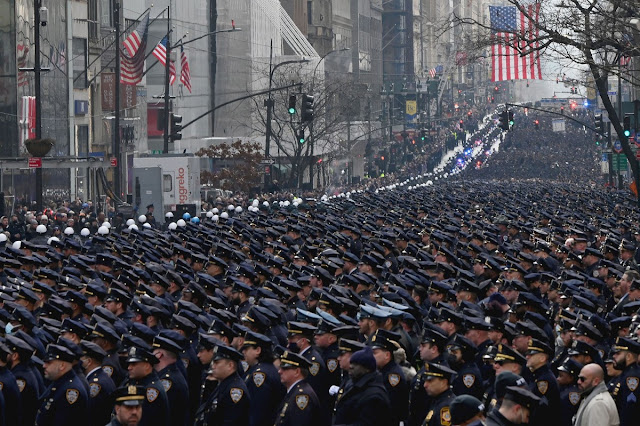 1. Funeral for Det. Wilbert Mora - Still incredibly sad. Yet, incredibly cool to see the NYPD and the surrounding police departments come together to honor the fallen.

2. Brian Flores - Flores gets the "Up" here for the simple act of courage that is his lawsuit filed against the NFL. He likely will not get another coaching gig again in the league (see: Colin Kaepernick) but his action has already drawn attention to some questionable hiring practices throughout the league, the lack of historical representation throughout it, and the ineffectiveness of the "Rooney" rule. It's also brought about diversity and inclusion policies in the common workplace as well.

Whatever your thoughts are on Flores or his lawsuit, you have to admire the man for putting it all on the line for a change he believes is necessary.

2A. Tom Brady's Career - I really thought Brady was going to play forever. But here we are - at the end. So many props to Brady for his dominance and stellar career. seven rings! Seven! It's still unfathomable.

3. Olympics Start - I'm not Winter Olympics enthusiast, but it's great to see the event happen for the sake of the athletes and those who have sacrificed so much to get this point (coaches, staff, trainers, etc...). Also, credit to organizers, managers, and administration who prepped to make the event happen. For a second, it looked like Omicron...well, you know.

1. "Legitimate Political Discourse" - I'm not sure what else to say about January 6th, and the response to it we've had. While we're banning books and specific history, it would not surprise me if we found a way to strike this from textbooks moving forward.

2. Joe Rogan - People love them some Rogan - after all, he's the podcast King. Myself? I've never truly been a fan. In fact, I'm surprised some of his antics have gone unnoticed for so long.

Truly, what's scarier is how comfortable white people are with saying and listening to the word nigger spurted so comfortably. After all, we're talking about 10 million people who engage in this platform. Regardless, I'm just not buying Rogan's apology.

3. Banning Books - If Critical Race Theory hasn't been misunderstood enough, the application is now being co-opted even further for political...ahem, discourse. Schools across the country are now looking to ban books, including one where black history month was seen as CRT propaganda. So yes, it was a problem.

I never once remembered anyone having an issue with Huckleberry Finn, and how it was trusted upon me and those in my classes of mostly students of color as a must-read American novel. I'll never forget the angst and discomfort of white teachers trying to guide you past the use of the word nigger and various uncomfortable scenes throughout the book.

But don't you dare read about Harriet Tubman...

Sorry, I get fired up on Education.

1. Zuckerberg loses $30B in One Day - This is just utterly absurd. I can't even wrap my mind around this.

2. Major League Baseball - Baseball wonders why the average age of its consumer continues to rise. I love the game, but this off-season I really feel will be a bigger detriment than players and owners (largely owners) care to admit.