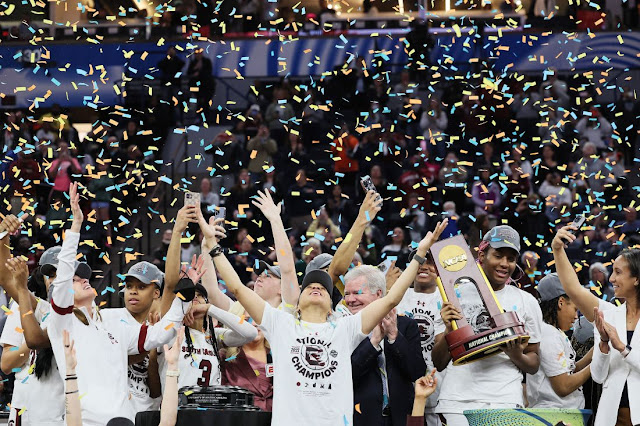 3 Up
1. Ketanji Brown Jackson - The new Supreme Court Justice is a win for black and brown girls everywhere. Representation matters.
2. Women's College Basketball Ratings - I'm giving the women's tournament its due as it garnered the highest television ratings ever for the national championship game in eighteen years. And that was head-to-head with the Grammys! Spare me the "women's sports don't draw" tired narrative. Invest in women's sports, period.
3. Baseball Returns - Sure, the sport bothered fans over the winter with its ugly and insulting labor spat. However, it's back, and that's cool.
3 Down
1. Ukraine Images - Unfortunately, I had to put the ongoing acts in Ukraine back in the tops spot. Have you seen some of the images coming out of the country? For me, it was the image of parents writing children's information (i.e. names, details of eating habits, etc...) on their backs - on their backs! - in anticipation of being separated from them at some point. Gutwrenching. What are we doing in this world?
2. Men Acquitted in Kidnapping Plot - So, you can plot to kidnap the Governor of a state, and even with evidence of your deed, you can NOT be charged? Ohhhh, the kind of privilege in our justice system.
3. Oscar's Ban Will Smith - I'm actually sick of this topic. What Will Smith did was wrong and is in no way worth defending. I just find the energy of the Academy...ummm, interesting...in their discipline of Smith. THIS is where they finally take a stand?
Cover Photo
South Carolina head coach Dawn Staley, center, celebrates with her team as Boston lifts the trophy.
Andy Lyons/Getty Images