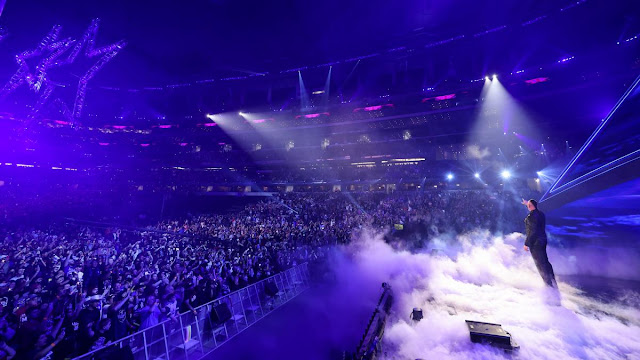 At times, I had no idea of what I just watched. I mean that in a good way, and at times, in a bad way, and in various moments, in a really awesome way. Wrestlemania Night 2 was just more of the same theme from Night 1 - overall fun, overall entertainment.
Wrestlemania 38 (Saturday) Review: "Just Fun"

Wrestling reviews by fans can often be harsh, cynical, and tough. Wrestling fans demand a lot, especially when it comes to wanting a level of satisfaction from the product in front of them. I'm not sure where you are in terms of the entire argument of "Sports Entertainment" vs. "Professional Wrestling" philosophy clash, but what I realized tonight is that no one out-Sports-Entertains the WWE.

Wrestlemania Sunday, and really the entire event, wasn't a wrestling in-ring masterpiece, but surely was entertaining. Philosophy be damned! I enjoyed my time on the couch devoted to this event, and quite frankly, that's all you can ask for.

Here are a few quick notes on Wrestlemania Sunday: 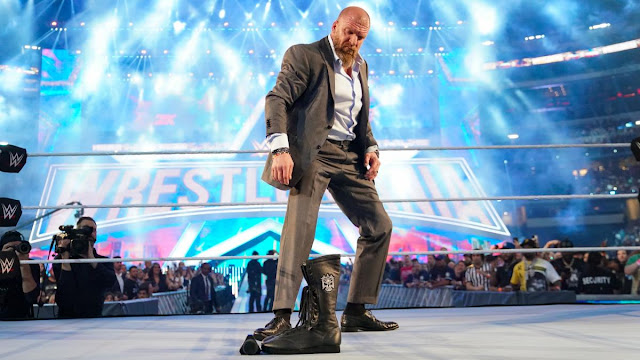 - Triple H kicking off the show was definitely a surprise. Ultimately, it was a prelude to what became a night devoted to my teenage self, who was consumed with wrestling in the 90s. Having "The Game" head to the ring and give his retirement gesture was pretty cool. Spitting water was never the same since Triple H entered our lives. He also (weirdly) made wearing denim vests over leather jackets badass.

But for real though, Triple H is just another one of those faces you grew up with, whose career runs parallel to so many moments in your life. This, unfortunately, is the way it all ended for him, but in a business where too many run too long, it's good to see him have a chance at the other more important things in life.

- Does the Weeknd and Pitbull have an exclusive contract with the WWE for official Wrestlemania songs?

- The Triple Threat Tag-Team match was a great opener. Nothing overly fantastic there, but it did what it should in being that chaotic, adrenaline-filled contest that delivered some cool spots and moments. The two RKOs delivered were so incredibly cool. And quite frankly, Randy Orton makes it all look so smooth. The dude really doesn't get enough credit.

We get Gable Steveson after the match (have they introduced us to him as of yet? Kidding, obviously), and we see him toss Chad Gable in what was a sweet belly-to-belly suplex. WWE is obviously going all-in on this kid as the can't miss blue-chip prospect. A program with him and Gable is an interesting start.

By the way, Kurt Angle kicked down some door years ago, huh?

- I tried to get into Omos and Lashley. I really did. From the video package, this felt last minute and rushed. But I'm happy for Lashley to get a Wrestlemania presence. 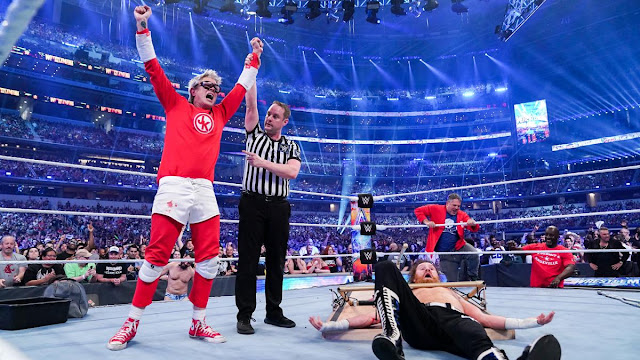 - I'll admit it, I've NEVER seen Jackass. Yeah, sorry. So for much of this match, I had no idea who any of these characters were that were suddenly appearing to help Knoxville. With that said, even with that limited knowledge, this was still some spectacle to watch. And if I'm being honest, if this happened on any other television show, it would likely be panned, but it's Wrestlemania. We're all just having a good time. Funny how that works, right?

This was enjoyable at times. I did laugh pretty hard at the big hand wiping out Zayn. And yes, the Mark Henry and Mae Young memes were great. I found the giant rat trap ending to be a bit wacky, but again...ehh.

What I do know is that Sami Zayn makes the VERY best out of everything he is given. He made this match everything it was and more. Sooooo much props to Zayn.

- The Women's Tag Team match was actually really solid and enjoyable. For the most part, WWE's women's Tag Team scene feels less like tag-team situations and more like pairing their random women's roster for the sake of the championship. 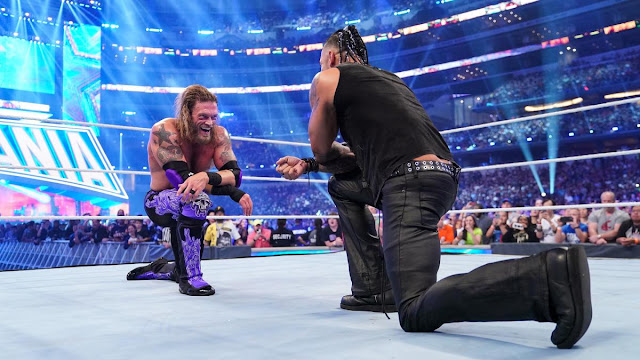 - I REALLY enjoyed AJ Styles vs. Edge. I really, really did. The match was great, and I liked the story it told throughout the match. Even the finish was a nice subtle touch of not much interference, but just enough to protect Styles from an outright defeat.

As mentioned in yesterday's review, I rarely watch WWE weekly programming, but it was VERY easy to see that this match came about in a really lame way. Edge wanted a match, picked a fight, then suddenly became darker? Just feels forced, lazy, and uninspiring for why this match is the climax of the plot. But eh, the rare spot for this event where the in-ring work made it enjoyable.

As for Edge's new deal, I'll reserve judgment to see how this develops. I like the pairing of him and Damian Priest. But, Edge just feels ( at least from what I've seen) all over the place since his return. But again, I want to see more...

AJ Styles continues to be a special once-in-a-lifetime talent in this art form. Remarkable, always.

- The New Day's tribute gear for Big E was cool. This one was barely there. I would've preferred more of this, and less of Omos and Lashley. But whatevs.

- The ENTIRE PatMcAfee vs. Austin Theory segment was absolute gold. From each match transitioning into the next phase of the segment, it was utterly beautiful. McAfee is an insane athlete and is just outright over with everyone - including myself.

Vince is just Vince. He looks so old, and his face (and body) now reflects the years he's given to entertain us, but there is still something about his presence on camera that is entertaining. The way he began ripping off his jacket was awesome.

And of course, there is Austin.

I beg anyone to think of a bigger pop that happens for another wrestling theme song than when the glass shatters for Austin. Sheer madness!

And yes, that was the worst stunner of all time on Vince.

And yes, McAfee spitting the beer in the air as he sold the stunner was also one of the coolest ones ever.

The teenage kid in me was alive in this segment! And quite frankly, from Triple H, Vince McMahon, Undertaker, and Steve Austin - all of their themes coming across the television at some point tonight - this really was some Wrestlemania for early Millenials and Gen X-ers. 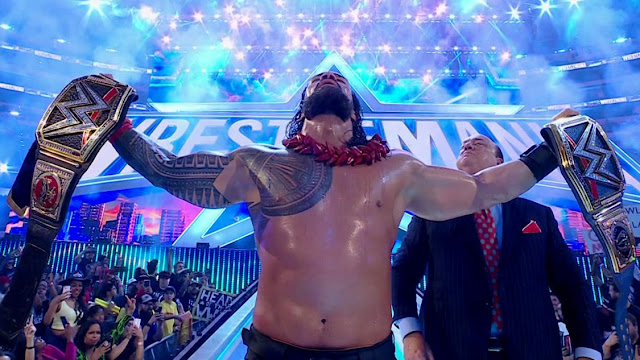 - There are few "big fight feels" that happen in wrestling these days. The industry is over-saturated with occurrences and exposure. Yet, everything about Brock Lesnar vs. Roman Reigns felt like that big fight.

Maybe it was me, but this just felt like it never hit its final gear. Or, maybe, I just wanted more out of it? Or, quite possibly, could it not reach the level of fanboy excitement produced in the previous segment?

I'm not sure what it was, but the match delivered its platter of big moves and hard-hitting action in a fast and furious way. The finish came just as fast, and just when you thought maybe there was more to the story (Maybe The Rock?), the little copyright box popped up, your heart sank knowing we're seconds away from this being the end, and then, it just was.

Roman needed the win and should have gotten the win. Honestly, I would love to see him carry this run right into next year's Wrestlemania. I like the idea of having Roman be the modern-day version of Bruno Sammartino with a title reign so long, so significant, and so dominating, that it reaches those levels of the history books.

However, with all of that said, I am curious what the next steps are. Which in itself, is a win for the WWE. Especially for interest from this evolved casual viewer.

With all of that said, Wrestlemania Sunday was good. Not as good as Saturday, but overall, the entire event was fun and enjoyable, and I wasn't left feeling disappointed, which is what allowed me to slip into being a casual viewer in the first place.

Sure, anyone can point to the fact that once again stars from the past carried an enjoyable Wrestlemania. But with that said, I'll take it, and go to bed happy being entertained.

*All photos courtesy of wwe.com