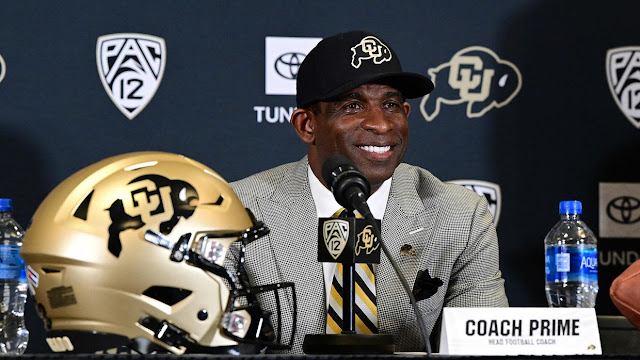 Deion Sanders was always one of those athletes in the '90s that I admired growing up. Exceptional. Larger than life. Just felt like you couldn't duplicate him, because, well, you couldn't. He did things his way, he was flashy doing it, and he was damn good at backing it up.

That was ultra appealing, dreamy, and easy to get into for teenage me who was tall, slow, geeky, introverted, and did I mention, slow?

Fast forward a few decades, and Deion Sanders is again "doing it his way" by taking his talents to Colorado University to become the Head Football coach, a few years after the resurrection HBCU institution, Jackson State. As you can imagine, especially in today's culture, everyone has an opinion on Coach Prime's (who the heck gets called Coach [enter nickname here]?) decision.

Once again, I'm enthralled with Deion Sanders. Here are some quick thoughts on what has become a hot-button topic wrapping, race, history, socio-economics, black culture, football, education, and a system that is completely broken.

Stop the Savior Complex for HBCUs

I have nothing but respect for HBCUs. One of my favorite TV shows of all time was (and still is) A Different World which sometimes makes me wish I attended one (of course, I went the other route and attended a PWI - go figure).

Regardless, the outrage towards Deion Sanders for deciding to leave Jackson State as a move that makes him a sell-out is quite frankly, absurd. I can go into all of the ways in which he has poured capital into Jackson State and placed eyeballs on HBCUs, most notably their culture and overall vibe for games.

With all of that said, this is not rooted in disappointment in Deion Sanders leaving, but merely in an unfortunate savior complex that black individuals owe an investment to HBCUs.

The hard truth is HBCUs have been historically notoriously, unfortunately, and grossly underfunded, under-resourced, and ignored. It's quite frankly the berth of their existence. And that problem is more with the Federal government and overall higher education policy than it is the responsibility of one (or a few) individuals.

Regardless, there is pride there behind that underdog spirit in surviving and thriving. But the aim shouldn't be investments to compete with the larger colleges of our nation which have generations of wealth, endowments, and federal backing. No, the focus should be on preserving that very spirit and culture that the University of Colorado believes is somehow being carried with Deion to Boulder.

Ready for this energy in Boulder 🤞🏻 pic.twitter.com/blgOC2hqBY

The real question is how many talented head coaches at HBCUs have been getting overlooked because traditional coaching search pipelines just don't go that way?

I Don't Think He's a Sell Out

Look, Deion can do what he wants to do. Go wherever he wants to go. Earn how much he wants to make. I'm not sure why he is not allowed to take the money, run to Colorado, and have the opportunity to do something special there.

He really doesn't owe anyone any kind of explanation.

No, not because he somehow did "so much for HBCUs" without anyone really and truly explaining what he did for HBCUs. Deion brought a spotlight that shined over SWAC football, opened the rest of the country to the black football experience that is energy, drumlines, and dancing, and more than just the on-the-field occurrence, and yes because he's Deion...excuse me, Coach Prime, things got National. Real quick. Just checking the recruiting classes.

The most important thing learned from Deion Sanders at Jackson State is that he has shaken and exposed the system. The whole entire thing. From the Power 5, through HBCUs, all the way down to Division 1-A, Division II, and Division III.

Is there unearthed talent? Remember, Deion Sanders couldn't get any offers in college football.

This brings me to...

Exploiting a System that Wants This

Deion Sanders did what every collegiate coach does in America. He used his previous stop, to get him to his next stop.

Deion Sanders is now using a transfer portal that is now used to shuttle kids from school to their next destination, in search and pursuit of an opportunity created by the power they hold. Move over NBA.

His quarterback son needs to look within the Power 5 for his aspirations of the NFL.

The University of Colorado is using money it currently does not have in hopes of generating it through the start power of Deion Sanders, to justify kickstarting this potential powerhouse...if he stays.

College football remains the wild, wild, west in pursuit of something only a small group holds - a chance at a National Championship and an opportunity at the NFL.

Deion is just using it...just like everyone else does.

Come to think of it, it's equity and equality at its finest