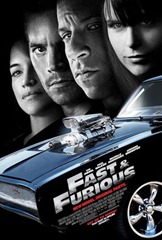 After the death of his girlfriend, Dominic Toretto and Brian O’Connor (Now working for the FBI) team up to bring down a heroin importer, and also in attempt to free his name.

The race between several drivers, including O’Connor and Toretto, where the winner earned an automatic bid as one of Arturro Braga’s drivers.

“A real driver knows what’s in his car.”

I must admit, my expectations heading into Fast and Furious were not much. While I enjoyed the first installation of the movie, laughed (not intentionally) at the second one, and would occasionally find myself watching the third one if there was absolutely nothing else on the tube, the fourth installation seemed destined to continue the on-going decrease in quality.

However, Fast and Furious delivered a compelling and entertaining addition to the series. Although the movie still lacks quality in terms of acting, delivery, and plot (Maybe it is supposed to be cheesy), the action and suspense, and yes, the cars, gives it a passing grade. The addition of various camera angles and computer graphics/green screen as seen from The Fast and The Furious: Tokyo Drift, also gives Fast and Furious and impressive feel.

All in all, not an Oscar Award nominee, actually very far from it. However, very entertaining and worthy of the hour and forty-seven minutes you will invest in it.