A New Yorker’s Note To The MTA

Its stories like this one (MTA votes for Major Service Cuts to Fill $383M Budget Gap) that often causes yours truly, and well everyone, to shake their heads in disbelief. After hearing about the possible cuts in service by the Metropolitan Transportation Authority (MTA), and the outrage and backlash it has created from the public, I have decided to write a letter MTA Chairman, Jay H. Walder.

Sir, as a native New Yorker, I am concerned about the effects that your service cuts will have on this city. I understand the pressure that you are under due to a huge deficit approaching $400M, and I also understand the other financial burdens that are directly and indirectly effected due to our nation’s current economic status.

However, Sir, I still find it very hard to understand the means to this end that is service cuts and job losses.

Well, for one, I find it very interesting that several MTA top officials, executive board members, and upper management have salaries that triple and often quadruple those in middle management and lower management. I believe it was the New York Daily News that once had an article on one of your upper management employees who owned over 40 vehicles, and hadn’t used the MTA Subway for over 10 years! I believe your $400M deficit maybe connected to your inabilities to handle and proportionate your expenses and salaries.

Secondly, for the past 15 years the Lexington Avenue Relief plan has been in effect. When will tax payers and consumers see the results? Reports and the estimated time of completion of the 2nd Avenue line continues to be pushed back and delayed. First it was 2006. Then 2008. Then 2012. Now it is 2015! Not to mention, fares have increased periodically as including the tolls on all of the bridges you also own. Where are the results? Where are the extra funds going?

And as for Giving tickets to riders taking up two seats, give us a break. Try cracking down on the homeless using cars as dorm rooms, then maybe you will be justified in doing so. 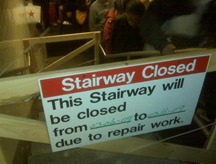 Also, you plan on issuing service cuts, however, despite being the most complex subway system in the world, in comparison to other systems, the MTA’s system is inferior in consumer satisfaction. Dirty stations. Rush hour delays. Broken escalators, non air conditioned cars, and other ineffective assistance. One can only imagine what the “service” will be like after the cuts are made?

And lastly, Sir, the elimination of free fares for children is absolutely ludicrous. The fact that your organization has mismanaged its finances so poorly in the past 10-15 years, that you levy expenses on  the middle and high school students in our city is preposterous. By forcing children to pay for their transportation to school, you make the lives of New Yorkers much more difficult than you already are. Foreshadowing, the rise in the number of children jumping turnstiles will increase dramatically. You can count on that.

All in all Mr. Walder, the current proposition of issuing service cuts in order to cover your $400M debt is just one more mistake that consumers have to pay for when it comes to the MTA. Especially for an organization that has no competition when it comes to its service.

I hope you understand that the MTA public image may never recover from this.

Hopefully one day we can further discuss such matters pertaining to the MTA’s inefficiencies. Don’t worry, and don’t rush. I’ll be around. You can find me at your local train station waiting several hours for a train.
Yours Truly,

A Concerned (and annoyed) New Yorker