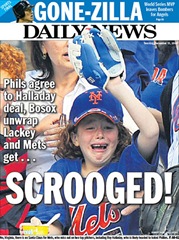 It seems every year Met fans are on edge about the way things are going with their team. Just waiting for things to finally get turned around. And to be truthfully honest, I don’t blame them at all. The way things have been for the last several years in Flushing, have striking similarities to that other organization over in midtown that also dons blue and orange – the New York Knicks.

The New York Mets, coming off a disastrous 2009 campaign, now find themselves left out of the hot stove season. In fact, after losing out on John Lackey (whom they never made an offer to) and seeing Roy Halladay move to the Phillies, the Mets could be set up of another disappointing season.

From the mishaps in design and character at CitiField to what seems like continued mismanagement, when does it end for the New York Mets? And most importantly, for their fans?

It is always fascinating when certain baseball fans complain about high-payroll teams and the luxury in abilities compared to smaller market teams. I’m sure you’ve heard the same rants about the Yankees, Red Sox, Dodgers, Angels, Cubs, etc…, yet never mentioned are the New York Mets.

The New York Met should be.

With a payroll in the top five in baseball, the resources of the Wilpon family, and the market that is New York City, one could make the argument the Mets should be the equivalent of their cross town rivals in the National League.

However, similar to the New York Knicks, pre-Donnie Walsh of course, the Mets have made several disturbing moves that have left them with aging, overpriced, and underproductive players with several gaping holes. And with Omar Minaya running the development system bare either by trades or poor drafting, the Mets are in a bigger hole than is realized. And we didn’t even mention the damage done by Bernie Madoff.

With season ticket sales significantly down and Met fans growing increasingly upset, the pressure to produce a solid product on the field is vital.

And with that, the Mets are now targeting Jason Bay in free agency. And there is the red flag.

The current, and reported demands of Jason Bay are for a five-year deal from $12-$15M per year. Many scouts and experts around the league already question Bay’s defensive abilities, and even wonder about his abilities to play at an elite level four years from now.

However, like always, the Mets are interested because it seems like a good addition. A can’t miss. A quick fix. A move that will appease their fans and impress the media. A move Isiah Thomas would have made as President of the Knicks.

There is a difference between making moves, and making the right moves. And everyone knows, including Met fans that this is just another move. While the Phillies are adding the best pitcher in the game, restocking a loaded development system, and adding the right free agents (Placido Polanco) to defend their National League title, the Mets are piling stones hoping to build a house.

And by missing out on Lackey, and flip-flopping between Matt Holliday and Jason Bay, the Mets express to their fans, a lack of planning, leadership, and knowledge.

Lest we not forget the coaching deficiencies, high payroll, mediocre results, lack of development, constant flux in talent, embarrassing management controversies, and many, many disappointments.

I may not be a Met fan, but I am a die-hard Knicks fan, and believe me Met fans, this situation looks very similar. There is still time to fix it. However, Knick fans thought that too, and well…we’re still waiting, and most of all, still hoping.