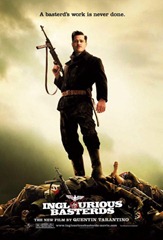 A series of events in Nazi-ruled France bring a Jewish-American rogue militia (The Basterds), a surviving French-Jewish Woman, and the entire Third Reich to ahead.

The opening scene (Chapter 1) where Col. Hans Landa interrogates a man who is hiding Jewish people under his floor boards, the man slowly breaks down in conversation and manipulation by Landa. After bringing in his men to shoot the floor boards, one woman escapes (Shosanna Dreyfus). Landa had a clear shot, but lets her go.

Where do we start? Inglourious Basterds is an epic film. A film that is just flat out excellent. Inglorious Basterds is entertaining, shocking, suspenseful, and funny. Quentin Tarantino does a good job of taking a very serious topic such as the Nazi regime, and turned it into a film that is serious and comedic as well.

Inglourious Basterds is broken into five chapters, with the first four depicting separate events and situations that come to a conclusion in the fifth and final chapter. Despite defying historical events, the plot is very unique, and the dialogue throughout the movie was very well done with the acting, especially Christopher Waltz, making it that much better.

Inglourious Basterds is a film that is worth the near three hour investment, and much more. A film that is one of 2009’s best, and one that is very highly recommended.