As stated before earlier in the week, “Tiger, what a mistake.”
And a big mistake indeed.

As the year comes to a close, and of all the happenings that 2009 gave us, this one is quite possibly the biggest head scratcher of them all. Yes Kanye, you are now off the hook. Tiger Woods and the infamous Thanksgiving night crash has gone from concern over the golfer’s condition, to the unveiling of a huge gap in character not seen before.
As the days progress, and the media sinks their claws deeper into his life and this story, the more that is uncovered about Tiger Woods, his extra marital affairs, and his secret life. And as this coverage continues, the more we are revealed to the real Tiger Woods.

No, not the fist pumping, swoosh wearing, Buick driving, Gatorade drinking, American Express using, green jacket wearing stud of athlete that we all knew. But Tiger Woods, the man.

It is now apparent that the difference between "Tiger Woods” and Tiger Woods are as long as one of his 300 yard drives.

Now, it is not a secret that professional athletes are not roll models. It’s been stated so many times, and hammered home by Sir Charles Barkley. Tiger Woods isn’t, and will not be the last professional athlete that as had issues with infidelity. These athletes are valued based upon there ability and not their character. Whether it be a field, court, rink, or course, athletes are more respected between the lines than any other area in life. It’s a sad but truthful statement. Which is why the quality individuals should be applauded that much more.

Yet in saying that, there is a contingent that believes Tiger Wood’s current situation should be left private. A mere family matter that him and his wife would need to deal with. And while that is very true, I find myself completely on the fence with such an issue. While Tiger’s only obligation to the public is his ability to entertain through his exceptional golf ability, the words of Michael Kay on his radio show made a very good rebuttal to that thought where he made the argument that Woods has made his reputation, career, and life off of public perception. He entered into that agreement by taking on all the adulation when things were good. Now that he has messed up, it’s time to take that side as well.

After all, Woods has been treated rather graciously by the media. In looking at a comparison of Tiger’s dealings to that of what Alex Rodriguez has gone through, the scale is heavily tilted towards A-Rod. Woods has been heralded for his entire being. Since the age of two, when he was on late night shows hitting golf balls, Woods was groomed for the mega-star/athlete that he has become, which is what makes this situation very disappointing.

And while many, maybe even including you the reader, may think the biggest issue in this situation is Wood’s assets and career, then consider the following:

Woods is still the world’s best golfer. Heck, maybe ever. He is still worth millions, and he can overcome this financially (See: Kobe Bryant). There are reports at the time that this piece is being written that Tiger is offering his wife up to $80 million to stay with him over the next seven years. Whether true or not, there are Major Leaguers on the free agent wire possibly looking into a Tiger Woods gig. All kidding aside, at $150 million plus per year, he can get by.

On the other hand, the most frequent comment regarding the Tiger Woods saga is his “choice of women.” Many have criticized his cheating because of the appearance of his wife. The large speculation of why he would cheat surrounds Elin Nordegren’s supermodel looks. A similar response to when Kobe Bryant went through his situation in Denver, CO a few years ago.

The issue of appearance, and whether who is better looking amongst the women is not important. While Elin is very easy on the eyes, his wife is his wife, regardless of appearance. There is no justification for adultery and infidelity.

And with that said, and all that was covered, the biggest issue regarding this situation is the failure of quality men in our society today. I touched base on such an issue a few weeks back regarding the Steve Phillips Sex Scandal (The True Force of Power, Sex, and Lust), and with Tiger Woods falling before our eyes, it is more apparent now so than ever.

It is not a comment or issue centered around being a male chauvinist claiming that society needs males, or one where I am getting up on my soap box to tout a “holier than thou” proclamation, but an issue that is a continuing dilemma in our society, in our culture, in our communities, and even in our homes. 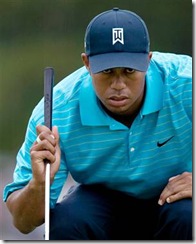 With news coverage being 24-hours a day, and living in the age of Maury DNA testing and lie-detector tests, we are constantly witnessing men failing due to ridiculous temptations. When does it stop? How much is enough? Do we even try?

What if Tiger put as much effort and concentration into his marriage and fatherhood as he does staring down a putt on the back 9 of Augusta?
But I Digress.

I understand that no one is perfect. We all deal with our own issues, have our own skeletons, and we all fall short of the glory of God. However, when and why has being a good husband and father become such a rarity?

And similar to my past reactions of those that have dealt with public transgressions, I wish and pray for the restoration of Tiger Woods. As stated above, “Tiger Woods” will be all right. He’ll golf, and use this to fuel him to dominate as well as an escape from it all. However, it is Tiger Woods that made the big mistake. And it is Tiger Woods that needs to be restored.

Let it be known that I am a big believer in second chances. Woods deserves one at his wife’s discretion. Yet, with true feelings as it stands today, Tiger Woods is a big disappointment. And the disappearance of quality men in our culture is downright disgusting.