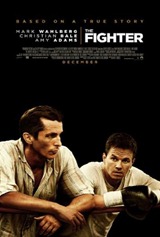 The true story of boxer, “Irish” Micky Ward and his family, as he ascends to the top of the boxing world.

After realizing that the constant fighting and divisiveness has hurt Micky’s ability to train for his important fight, Dickie goes to Charlene’s house to convince her that Micky doesn’t need to choose between his family and his new training management, but he needs all of them to get along for what’s most important, his opportunity at the WBU Welterweight title.

Mickey Ward: [after seeing the size of his opponent] That guy did not just get off the couch. If he did, I’m gonna get a couch like that.


The Fighter is a film that was expected to be good, however, after viewing it, it is much better than just good, it’s great. Surprisingly great, if that is possible upon watching an expectant good movie. A true story, The Fighter really shines through a cast from Mark Wahlberg, Christian Bale, Amy Adams, and Melissa Leo who carried this film with superb acting. And to be honest, with sports, especially boxing, movies, it is very difficult to make a predictable plot into an amazing film. However, The Fighter pulled it off due to those four, no question. And while Wahlberg was the star of the film, the true talent in this film was Christian Bale playing the role of Dickie Eklund.

With most boxing movies, the Rocky series is the measuring stick and comparison bar. While Rocky was, and still is, one of the greatest sports films of all time, The Fighter joins Cinderella Man and Million Dollar Baby as boxing movies on par with Rocky. Sacrilegious? Highly doubtful if you see The Fighter. While it is the usual plot of rags-to-riches, The Fighter evokes a bigger story of brothers dealing with demons, conflict, and self realization to make a dream a reality.

All in all, your usual overcoming the odds boxing story, but well worth it due to the performances of Wahlberg, Bale, Adams, and Leo. A must-watch.