A Synopsis of Where Our Nation Is Headed 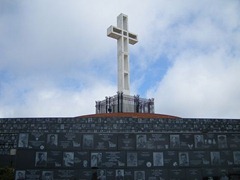 Recently, a federal appeals court ruled that a cross erected on public (federal) property atop 822-foot Mount Soledad in San Diego, California was unconstitutional. The statue which has stood at the site since 1954 in honor and memorial of the Korean War veterans has been under debate and controversy since 1989 when two Vietnam War veterans filed suit against the city of San Diego stating it violated California’s “No Preference” clause.

The following statements were made by the court in its decision:

"The use of such a distinctively Christian symbol to honor all veterans sends a strong message of endorsement and exclusion. It suggests that the government is so connected to a particular religion that it treats that religion's symbolism as its own, as universal. To many non-Christian veterans, this claim of universality is alienating.”

Now, I’m not sure of how this ruling has played out in the court of public opinion, whether most Americans agree or disagree. From the article written on CNN.com, it seems that most Americans are indeed in favor of the decision. And without going into a full blown rant, I must say, this is highly indicative of the direction our nation is headed.

Now, I will admit, I will attempt to curtail myself from going on a full-out rant on such a decision in prevention of sounding irrational and like a thick headed bully. As the truth of the matter is, I understand the opinion of those who are in favor of tearing down the monument, or even the thought of changing it to a more “universal” symbol for all (that idea itself makes me roll my eyes).

However, the mere fact that our nation in the last two decades has gone out of its way to thicken the lines between life and faith is beyond absurd. Recently we have seen motions to remove crosses, public nativity scenes, the use of God in our nation’s long-time traditional songs, and even the root word of “Christ” from Christmas.

What about the separation of Church and State?

And that is a good point. Yet, when our society goes out of our way to extend the meaning of a public cross or nativity scene, or anything else that may seem as a blend between Church and State, we are simply stating that religion, whichever one it may be, is a simple part of everyone’s life that should be kept silent, packed away, and not expressed in any type of way.

Bottom line, we are devaluing faith and religion in our country. A country whether we choose to accept it or not, is was built on biblical standards and laws.

And as I witness this change occurring each and everyday through our now suddenly crass society, it is ironic how focused, politically correct, and sensitive we are when it comes to faith, God, and religion.

Yet, what is of more irony, is the our nation’s ability to tear down crosses, remove God from our pledge of allegiance, phase out Jesus from Christmas and Easter, and eliminate all nativity scenes, however, we continue to print “In God We Trust” on our monetary currency, and we sing to the high heavens, “God Bless America”, in times of need.

Is this a right-winged, red message influenced post? Not at all. Couldn’t be further from the idea. It’s just a mere synopsis of the direction our nation is headed.