January 05, 2011
It is a story that has gripped the nation like non other I have seen in my lifetime.  The story of Ted Williams and his rise to fame and prosperity overnight is one that is a true rags to riches journey. The sheer thought of standing on a street corner, homeless, and continuing to dream a dream, hoping, praying, clinging not only to survive another day, but to keep that very dream alive is one that is inspiring, miraculous, and heartwarming.
[Blog Side Note: And before we forget, how about some credit to Columbus Dispatch photographer, Doral Chenowith, for discovering and bringing this story to life? Just as remarkable as this story has been, is the person who saw a homeless guy, entertained him, and discovered what might be in front of our faces every time we roll our eyes, or thumb our noses at a homeless person.]

Upon viewing this video for the first time and hearing the voice of Ted Williams, I had the same reaction that I’m sure many of you had – wow! The title of the video was not one of embellishment or false advertising. Ted Williams truly has a special voice. And for those of you who are DP devotees, you know that when it comes to announcing, whether it be Bruce Buffer, Harold Fink, Kevin Harlan, Gus Johnson or whom ever, I am a fan


I am also a fan of this story – but not for the reason you may think.

Despite the great gift Williams possesses, and the wonderful story that has inspired us all in this very young year, the one aspect that has truly impressed me is Williams’ humility and humbleness. 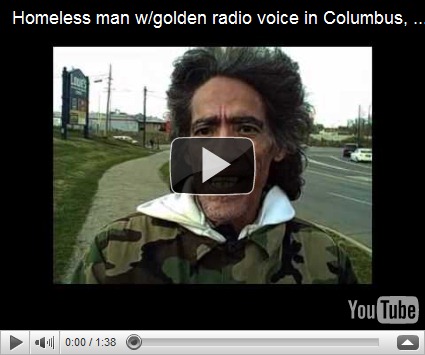 In the video, he was willing to share his gift, as well as testify on the demons which has created the path he has taken. In his new stardom, Williams has been willing to share his story openly, and has the poise to not get wrapped up in the sudden shift in life. After receiving a job from the Cleveland Cavaliers organization and NFL Films Productions, along with several perks of new cars, houses, and one in which the Cavaliers have agreed to pay his mortgage, the first task on Williams’ new found stardom was to visit his 90 year old mother who he hasn’t seen in years. A person who he claims never gave up on him.

And while Williams is a hot commodity right now, and has a great story, there is another side that cannot be forgotten. A side that must keep us too high from this inspiring ride Williams has given us. For, we have seen stories like this that have been false gold. Another opportunity, just meant another opportunity to waste. After all, he is a recovering alcoholic and drug addict who has various arrests as recent as May 10th, 2010.
As I wrote a while ago in a post entitled, The Irony of Second Chances:

“Second chances can be a wonderful thing. The opportunity to present one, and the fortune to receive one are wrapped up in the humanity of kindness, compassion and human error.”

I hope this isn’t fools gold.

As Williams begins his new life, I hope that he does not forget the past twenty years of his life. I hope that part of his life is truly over. For God has granted him a second chance at life, and one where a gift that was given to him can be used. Most importantly, after twenty years of hardships and keeping alive a dream, I hope Williams remains humble, and shows humility over his sudden fame. He may be the man with the “golden voice” but it is his  golden heart that is truly inspiring.