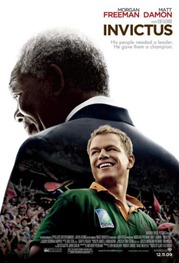 The story of Nelson Mandella’s first term as President of South Africa, and how he used a unique avenue of encouraging the national rugby towards the 1995 Rugby World Cup to unite the apartheid-torn land.

After complaining about the sudden increase in their training, the national rugby team is bused to a rural area where they had the chance to meet and teach the game to many children who were anticipating their arrival.

“Forgiveness liberates the soul. It removes fear. That is why it is such a powerful weapon.”

Invictus is a movie that has a different vibe to it. Different but very good. A vibe that leaves a “productive” type of feeling when it is complete. Going in, most will expect a typical sports movie with a plot of overcoming and achieving for a greater good. And while Invictus does indeed have that, it is merely a backdrop for a bigger, and more inspiring story – the uniting of South Africa after years of apartheid. Invictus is a great film that attempts to portray, as well as, enlighten he viewer on the world within South Africa after apartheid ended, and Nelson Mandella was elected President.

With Morgan Freeman and Matt Damon, it is hard to expect anything besides great acting. What was truly impressive was Freeman’s portrayal as the wise, pacifist soul that was indeed, Nelson Mandella. And while the portrayal was not one of the best I’ve seen in regards to actors and real-life heroes, Freeman did a remarkable job.

All in all, Invictus is a film I would highly recommend for everyone. A great reminder of our world history, how far we’ve come, and the power of sport to unite people despite the largest of problems.

Very much worth the 134 minute run time.