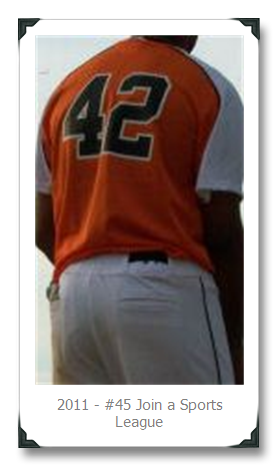 Following four years of playing college baseball, one would think that staying active and involved with sports would come naturally and very easy. However, never considered are the new responsibilities, expectations, and changes that life would bring following college. For your truly, this was indeed the case as playing sports, an hobby that consumed me growing up, now seems like an appointment and process to participate.

Following college, new responsibilities of a job and the effects of torn ligaments in my foot forced me to be idle for several months. With the healing of my damaged foot also came a sluggish and slothful lifestyle, and of course, much needed weight gain.

However, 2010 was a year that yours truly decided to – and did – get back into shape. Along with that, I decided to finally start playing sports the way I used to. A pursuit to regain the past, and bring it to the future, if at all possible.

If father time allowed me.

And hopefully, if it wasn’t too late.

In 2010, I played a few games with my church softball team, including a memorable charity game on a Fall night in September. In 2011, I joined the team full-time. Not only has the commitment helped rekindle that competitive drive that I used to have; not only has it crossed off another task from my 2011 Bucket List; but it has given me a sense of what I once lost somewhere between my junior year of college up until 2010 – focus. And oh yeah, I’m playing shortstop and hitting fourth! Who would’ve thought?

The ability to play football, baseball, and basketball for hours on end, everyday, is no longer a viable option. With a job, a soon-to-be-wife, and various other responsibilities, it is impossible to recapture those days. However, while skills fade, a competitive spirit does not. One of the ways to feed that spirit, unfortunately, was not through lifting and working out, but by competing, and maybe, joining a sports league.

As the weather warms up, and the softball season continues, I find myself enjoying the things I lost such as camaraderie, competitiveness, drive, focus, and (oh yeah!) even those sores and pains that I’ve always had growing up.

And while that once club, surgically repaired, left foot barks in soreness after a long double header, I welcome it. As I know, I’m slowly getting to back, to where I’m headed.