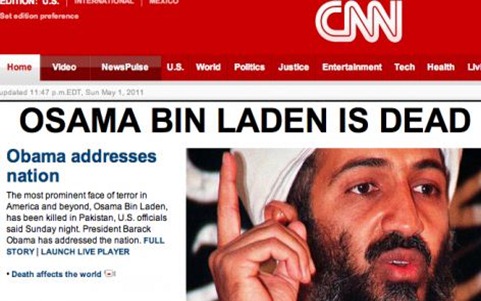 It’s five words that caught me by surprise as I washed dishes after dinner on a late Sunday night. Five words that caused a sense of shock, a sense of relief, and a sense of eagerness to find out more. Was it true? Was it really him? How did he die? Did U.S. forces kill him? Many questions flooded the thought process emotions ran wild, speculation rampant, and feelings that were tied up in a hardened knot, unraveled as confirmations came in through the television.

And as I sit here punching the keys, writing, and attempting to reflect on the past ten years, on my feelings of September 11th, and how I felt when the war on terrorism began, I still struggle to really focus my thoughts and my words. So many varying thoughts and feelings unfold, of what seemed like ones that were tucked away tightly after 9/11.

For example, I find it truly bold and telling, that in the grand scheme of things the death of one man can bring about so much happiness, relief, joy, and hope. However, that is the evil that Bin Laden represented. The evil that he truly was.

With that said, part of me wonders why celebrate? Evil does continue.

Another side of me is thankful for President Obama and his gutsy call. And whether you wish to agree as well, but President Bush’s guts to send troops, keep troops, during tough times and contrary opinion. Yet, it all looks clear now. Bin Laden dead. And a slowly transforming democratic Middle East.

However on the other hand, wars are just that, violence. And the many, many, innocent people who lost their lives over the past few years in this War on Terror…

…and the many troops and soldiers as well, not just from the United States, but from across the globe as well.

And quite honestly, another part of me wonders if we are better than the people in the Middle East that paraded around after 9/11?

Aren’t we better than giving honor and power by celebrating a man that killed so many?

On the other hand, I’m proud to be an American. Proud of our democracy. Proud of our courage. Proud to celebrate a moment we’ve all waited for.

Yet, cynical in how long it will be before we are fighting again, blue versus red, right versus left, and all of the important debates such as President birth certificates.

Yet, another part of me wants all of the images of a deceased Bin Laden out for everyone to see, for all the images to be exposed for everyone, and to be burned into our minds the way the images of 9/11 were.
Sadistic? Sure. But hey, I’m human…and honest.

The words that I wrote following September 11th, as well as the words written on that March night in 2003, the first air strike in Afghanistan signifying the beginning of this War on Terror, are gone forever due to a computer crash. And while on a day like today I would have loved to look back on what my mindset and thoughts were during those two days to attempt to bring together some rational thoughts today. However, my strongest, and very emotionally raw,  feeling of Bin Laden’s death is that of a book end.

However, while the death of Bin Laden has brought about an end of a chapter, it is truly naive to believe that this is the end. Evil will always exist. 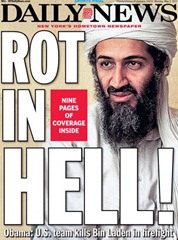 Yet, the end of a era that was the last ten years is not exactly the book end that comes to mind.

While the  five words of “Osama Bin Laden Is Dead” creates a stir of reactions and emotions, there are three words placed on the back page of the New York Daily News that has given me a sense of truth. A sense of absolute confirmation. A true sense of a book end.

It may be just a harsh saying to most, and a catchy headline to others, however, the fact of the matter is, that is the truth.

Osama Bin Laden is in the fiery pits of Hell, burning for the rest of eternity.

And yes, my emotions can be summed up with relief, joy, sadness, triumph, shock, confusion, and even a hint of cynicism.

However, I know for sure, Osama Bin Laden is in Hell.

And that is the only emotion, that is pure, and without doubt.