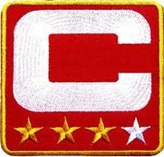 After months, days, and hours of thinking, deliberating, and even calling a few last-minute audible, I have finally made a decision on my best man, or shall I say, best men. From what I have heard from many people, this decision is one of the easiest in putting together a wedding. However, for me,  it has been a lot more difficult in comparison because I’ve never had one-true-best friend. I’ve never had that guy. I’ve never had that Paul to my Kevin Arnold. Over the years I’ve always had a few guys that I’ve grown with, changed with, and experienced this race called life with. Therefore, making a sole decision on who would be the guy, often seemed like a big decision, and in all honesty, an unfair one as well.

Nonetheless, a decision has been made. I’ve decided to go with three best men (with an almost fourth that declined) for 9.24.11.


Even though I always have hated co-anything for any type of awards, titles, or honors, this was the only way I knew how to effectively choose the guys that will be the best men of my wedding – the captains on Team Robo.

The first best man (in no particular order) is a friend I’ve known since I was 14. He’s a guy that I share many, many, similarities as far as family, likes, dislikes, and most importantly, humor. He’s the friend that I could spend hours and hours with laughing hysterically over various things from sports, wrestling, television, music, and just life in general. Never an uncomfortable moment, and never any dull ones either.

The second best man, is a friend I’ve known since I was 12. Our bond dates back to a day where yours truly stood up for him when he was being bullied by two other kids for his lunch. Ever since then, we’ve grown together through hanging out and playing many, many, many hours and days of playing basketball and football along with best man #1. He’s always been my biggest fan, and that has never changed, even when I have. Everyone deserves a die-hard friend with unwavering loyalty, however, not everyone has such a person. Luckily, I’ve had this guy, whose loyalty never fails.

The final best man is an individual I met during in college. My freshman year he lived next door to me, and the next three years, I had the chance, and privilege to call this guy roommate, teammate, and friend. Actually, after writing that statement, I believe I  spent more time with this guy than I did with my tag team partner during my college years. From studying, hanging, and traveling, he’s a guy I’ve not only grown close with, but his family as well.

Nonetheless, this guy, as much as either one of us wants to admit it, which lends to what I’m about say, is more like me in so many ways that anyone else I have ever met. Our love for baseball bonded us, and our navigation through a unique environment at Cazenovia College kept us together. Many good times, and hopefully many more to come.

These are three guys who not only define the term “best”, but three guys that have influenced me and my life in many ways. I now have no doubt, that these three will proudly fill their roles as el capitanos de Team Robo on 9.24.11.