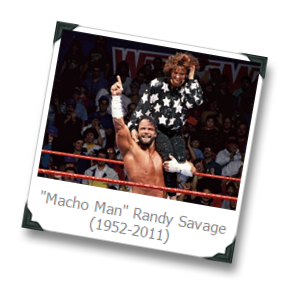 This seems to be a post that I wrote too often recently. With the shocking news of “The Macho Ma” Randy Savage’s sudden death, the wrestling world once again is mourning of another one of its own, gone too soon. I’ll attempt to refrain from getting into the saddening statistics of wrestlers dying before their 60th birthday over the past 25 years, as well as will not rant about ESPN’s trend of reporting pro wrestling news when it is negative. Instead, I want to focus on Savage, his career, his place now in this business, and how I will remember him.

I first heard about the news from a text my tag team partner sent me today. The transcript went as follows:

Savage has always been one of my favorites growing up as a pro wrestling fan. In fact, one of the stories my lovely tag team partner rolls her eyes and laughs at (and probably wonders how crazy I was as a child), is of my 5th grade graduation. The Macho Man’s entrance theme was that of “pomp and circumstance”, otherwise known as the graduation song. Well, as a mere young lad walking across the stage, yours truly had the audacity to mimic Savage on front of an entire auditorium.

However, during an age where Hulkamania ran wild, yours truly had favorites in Bret “Hitman” Hart, “Mr. Perfect” Curt Hennig, and Savage. While Hogan’s place in pro wrestling history is now accurately defined as “Babe Ruth of wrestling” and “the biggest box office draw” in the business, it was guys like Savage, Hart, Hennig, Steamboat, Flair, and many, many, others that stole the show on a nightly basis. In fact I’ve always believed, Savage’s career has always been viewed with a skew because he always played second fiddle to Hogan during this era.

Savage, a superb athlete, played minor league baseball before bringing his energetic and charismatic abilities to the pro wrestling world. Savage in my eyes, is one of those rare wrestlers that have the complete package. He had it all – the in ring ability, charisma, showmanship, and that intangible mind for pro wrestling. Let’s not forget, Savage was one of the few wrestlers that transcended pro wrestling into pop culture. He was (and still is) a household name.

And I’ll probably be bashed by the pro wrestling purists out there, but the guy was flat out entertaining.
In my eyes, top 10 of all-time.

In an age where it seems managers are a lost art, and many of the legends in pro wrestling always seem to exit on bad terms, its a shame some of them aren’t hired to not only mentor, but pass on and coach some of the younger talent today.

Savage was a prime candidate for this.

An even bigger shame, is Savage not being entered into the WWE Hall of Fame due to a falling out with the company and Vince McMahon. How Koko. B. Ware is entered into the HOF before Savage will always be a mystery.

Nonetheless, another pro wrestling great is gone. And another part of my childhood goes with it.

I will always remember Savage as what he is, one of the pioneers of evolving pro wrestling into the mainstream – one of the best to ever lace up a set of boots