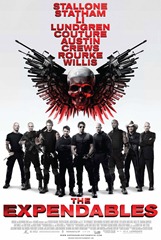 A team of banded mercenaries head to South America in attempt to overthrow an evil dictator.

After his old girlfriend was assaulted by her new boyfriend, Lee (Jason Statham) attacks him and his friends on a basketball court.

Paine: Who sent you?

The Expendables had a lot of hype when it was released as the ultimate guy flick, mainly due to the large all-star cast of action stars and notable key demo guys like Steve Austin and Randy Couture. With other guest appearance such as Arnold Schwarzhnegger and Bruce Willis, the movie had a cast to produce the action film of all action films. Unfortunately, the only thing the Expendables have going for it is indeed that – a roster of action stars.

This film, absolutely has no depth past it’s all-star cast. The plot is simple and basic, the dialogue chocked full of cheesy, roll-your-eyes-type of lines, the action scenes are full of head scratching moments, and the character have zero depth, except for maybe Mickey Rourke’s character. In fact, after watching the film, you’d be hard pressed to named the characters. It’s that type of film.

The positive of The Expendables is indeed the action. However, while the action is engaging, it lacks any real substance because it’s just there. With no rhyme or reason.

As noted on IMDB.com, Jean Claude Van Damme  was originally offered a role, but turned it down claiming there was no substance in the character. Van Damme saw this train wreck long before it started shooting, and that in itself speaks volumes.

The Expendables has a lot of glitz, glamour and hype due to its buffed-up cast and cool, bloody, scenes. However, all of the hype fails to measure up to its potential.

This one is better off watched if you have a few hours to burn while sick in bed on a rainy day. If not, there are much better options out there.