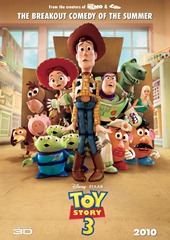 After being mistakenly delivered to a day-care center instead of Andy’s attic, the toys struggle to not only escape the center, but in finding a future and closing the chapter on their past with Andy.

After being inside a recycle refinery, the toys hold hands thinking they will die together. However, the three aliens swoop them up with the trash claw and state (similar to the original), “The clawwwww”.

Buzz Lightyear: “Spare me your lies, temptress! Your emperor's defeated, and I’m immune to your bewitching good looks.”

Toy Story 3 is an excellent film. There is no other way to put it. The last of the trilogy was amazing from it’s drama, comedy, humor, limitless creativity, and it’s ability to not only entertain, but wrap up a great series. The team behind Toy Story 3 should be well applauded for their efforts as all of the hype surrounding the film is well-deserved and more.

The plot in Toy Story 3 brought to life new characters and bid farewell to the usual gang with a plot that was super engaging. Not to mention, the insanely hilarious “Ken” character. The viewer will develop a bond with all of the characters throughout the movie, which is a true testament to an excellent writing crew.

This review can go on, and on, and on, about the the greatness of Toy Story 3. It is a definite must watch for everyone.