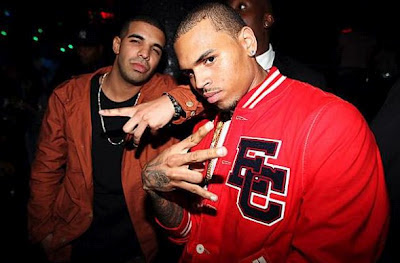 I'll be the first to admit that my thoughts of today's generation aren't of the highest regards. I've made that known in the past here on the DP several times, and because of that, I try to refrain from commenting and thus sounding like a broken record. But if you are new to the DP, in a nut shell, today's generation is uncreative, lazy, egotistical, narcissistic, and somehow feels overly entitled to any and everything. Sorry, if that sounds harsh.

With that said, it is stories like the recent Chris Brown and Drake late-night club fight that causes one to reignite the above claims and thoughts about today's generation, more specifically, music and our society.
If you've been under a rock, you can catch up on the news here.

Nonetheless, upon hearing the news of this fight and the details surrounding it, I can see why everyone uses those proverbial letters of "SMH" to represent their disgust. And shaking my head is all I could do when it comes to this.

To hear that two grown and successful men were fighting over a woman who obviously does not care for either one is downright laughable. Fighting because a note was sent over to a table and "certain looks" were given is as high school as it gets. And throwing bottles aimlessly? That's the epitome of a coward.

Yet, Brown and Drake participated in all of the above. In fact, they decided they needed to take their "beef" to the next level. A level of placing many innocent bystanders in harms way, and seriously injuring a select few. A level of continuing to ruin the reputation of the beautiful art once known as hip-hop. A level of acting without accountability only to get a buzz going on Twitter about them. A level of continuing, and proving, the negative stereotype placed on all young, black and successful males.

And we all thought Tupac Shakur and Christopher "Notorious B.I.G." Wallace died over a stupid feud?

Stupid it was...but at least they made timeless music.

This situation is utter ridiculous. And these two haven't done anything that will last beyond their lives.

Chris Brown and Drake are clear examples of a generation that seems to be losing it, or in some ways, just doesn't get it.