A Ring For The King Well Deserved 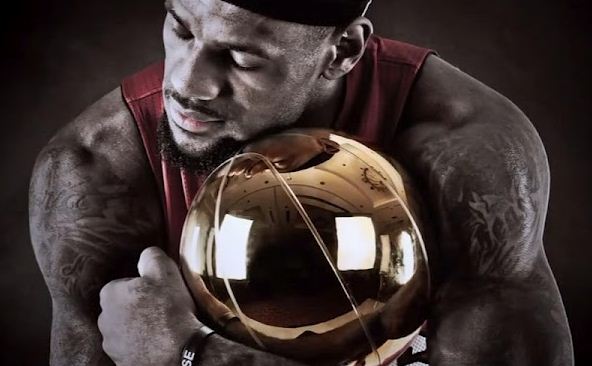 Well, he proved us all wrong. Admit it, he got you as well.

On the heels of witnessing (is that phrase still hurtful to Clevelanders?) LeBron James win his first NBA Championship, the topic of his ongoing career has once again become the talk. We are no longer talking about where he is going to sign (thank goodness!), but now the trendy conversation revolves around how many Championships he is going to win (not 1, not 2, not 3...)? Is he now in the conversation with Michael Jordan? How many titles does he need to validate himself? Will he ever go back to Cleveland?
All questions that make for interesting sports talk, but can we hold off for a few days? Can we simply just give him his due in the moment - the way it should be.
In today's world of blogs and Twitter, over analyzing, and further sports psycho-babble, everything gets blown out of proportion. Way out of proportion. And maybe that is due to the NFL's influence on our society where such rash generalizations can be made from game-to-game, but what James has gone through over the last two years has been brutal.

Now, I know...I know, he brought it upon himself. I completely get that, and I completely agree. And I'm not even sure James even fully understands the type of damage he did to his image from the The Decision and his departure to Miami. But, it happened. It's done. It is over with. I was one of those people that rooted (and will continue to) against James, and even Wade, Bosh and the rest of the supporting cast for the Super Friends of Miami. Not because I hate or despise what he did, but because I was ultimately disappointed in his career turn (Disappointment: The True Fallout From The Decision).

And let's be honest, as a Knicks fan, I despise the Miami Heat. James just so happens to be a part of that now.

Nonetheless, despite his actions, or your feelings toward or about him, one thing is for sure, you have to respect his ability. I've always said, James is the best basketball player in the world, period. There is no comparison. Even when he had the monkey of "not being clutch" on his back. James in fact, as stated in the very first Pondering 10 list, is my favorite current athlete to watch. The guy is phenomenal. You have to - HAVE TO - admit that.

However, in the midst of all of this championship-repeat talk and foreshadowing comparing the Heat roster to what is left of the teams in the Eastern Conference, the now consensus is we ought to look forward to a possible nineties Chicago-Bulls-like run in the near future.

That may well be very true.

However, I think we all simply just need to digest what just happened. We are seriously in such a microwave society, that we're always looking to move on, and so eager to discuss legacy, career outlooks, and comparisons. While they are fun and make for interesting debates (often times very ridiculous as well), let's take a step back and realize what just transpired.

For me, this Heat run was amazing. While I rooted hard against them every step of the way, including when they dismantled my Knickerbockers in the first round, they went against the grain and did what the world outside of Miami and new Heat "fans" and fraud-bags worldwide, didn't want them to do. The Heat overcame two years of ridicule, constant scrutiny, personal issues, health issues (Anyone notice Mike Miller can barely walk off the court?) and professional hurdles to win a championship.

And yes, LeBron's run was historic. And for those that can't seem to let go, strip away the name and the reputation of the man that performed, and we all just witnessed one of the greatest playoff performances in the history of the NBA. And personally speaking (since this is my blog), I'll never - ever - forget the night of Game 6 of the Eastern Conference Finals between the Miami Heat and the Boston Celtics. LeBron's performance was out of this world, and that should be cherished and celebrated.

So with that, said, LeBron-haters and the rest of us (myself included) that continually send out mind-bullets and negative energy through arenas and television screens everywhere to keep him from getting it done, let's just take a step back from rushing forward, and for goodness sake, let's put away the little remaining arguments over what he can't do well (which is really nothing at this point), and let's just let him have his moment.

And how about this, let's all enjoy it with him.

Because you know what, after that playoff run, entertaining us all, and of course throwing all the negativity and doubt back in our faces, he deserves it.

Damn, does he deserve it.