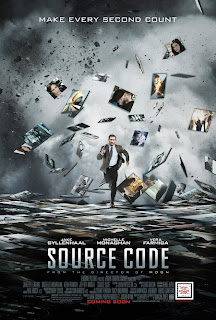 A former U.S. Airforce captain wakes up in the body of an unknown man and finds out he is part of a project to find the bomber of a Chicago-bound train.

After initially learning about why he was part of the source code project, Colter is sent back to the situation to try again for the third time to find the bomber on the train. This time he ends up finding the bomber, but comes up short and is killed by the bomber.

Colter Stevens: Christina, what would you do if you knew you had less than one minute to live?
Christina Warren: I'd make those seconds count.

Source Code is a pretty good film that somehow missed the PR movement for movies in 2011. The film, which has a plot similar to the Matrix with a real world and an alternate world and a moving connection between the two, gives the viewer a chance to not only interpret what they want, but also to use their imagination on the ending of the film.

The film is indeed catchy, and will hook you in as you find out more about what is going on with the "Source Code" project as it develops.

The overall talent in the film is there, however, Source Code isn't designed to give the talent the chance to really shine. Jake Gyllenhaal, who plays Colter stars in the film, is really the only character that has some time of development. Unfortunately, Gyllenhaal's performance as Stevens left a bit to be desired as I truly never connected with him, or even felt for him on his search to for his dad and to end his life with honor.

All in all, Source Code is a pretty good movie that will definitely give the imagination some practice, and is worth the 93 minute run time.