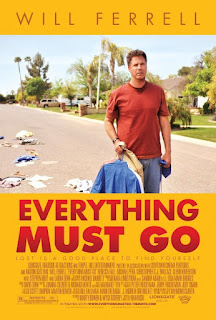 After an alcoholic relapses, he loses his job, his wife, and his car, and is forced to not only sell his belongings in a front lawn yard sale, but confront and let go of his problems.

After coming home drunk, Nick let's it be known that he has problems just like everyone else on the block, except his is just out on the lawn for everyone to see. He then challenges Samantha on her obvious problems, which she then becomes defensive about her situation.

"I'm no different than any of you. I just don't hide in my house"

Everything Must Go is an amazing film that somehow has gone under the radar given it's amazing quality. The plot which surrounds the issue of personal problems and dealing with them in a real manner is very effective and is enhanced by the star quality and acting that really brings the characters and plot to life.

Quite frankly, after seeing this film, it is by far the best work Will Ferrell has ever done in a lead role. His character, Nicholas Halsey, was funny, passionate, inspirational and most of all, very real. Ferrell's role was greatly supported by Rebecca Hall who is always solid, and an awesome performance by the son of the Notorious B.I.G., C.J. Wallace, as Kenny.

Everything Must Go is entertaining all while bringing to the forefront the aspect of moving on and living one's life. At the end of the film, you will be drawn in and will care for each character's future after the big front-lawn garage sale.

I greatly recommend putting this one on your shortlist to check out.