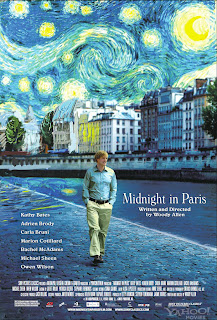 A struggling writer's long walks at midnight in the city of Paris causes him to fall in love with the city through adventures in another time period.

After having too much wine, Gil takes a walk, gets into a car, and eventually ends up in a place where he meets his favorite writers such as Hemingway and Fitzgerald. He has no idea where he is, but is very excited to be there.

Inez: You always take the side of the help. That's why Daddy says you're a communist.
---
Gil: What is it with this city? I need to write a letter to the Chamber of Commerce.

Midnight in Paris is a film that will completely catch you off-guard. Described as a "romantic-comedy" and misleading in it's DVD case description, this film is one that will surprisingly entertain and engage. And no, this film is far from resembling anything of a romantic comedy.

Nonetheless, with a superbly creative and interesting plot of the character Gil entering a different time period via a midnight car ride and how it relates to the present is very well done.

The usual expectations from Director Woody Allen are present in this film, including a slow moving and European fascination-filled pace, for those that enjoy a film that forces you to use your imagination, Midnight in Paris will be a great watch.

And what really makes the film entertaining, is the work of Owen Wilson as the quirky character, Gil. Wilson perfectly fills the role and truly comes off as a loveable protagonist whom you simply feel excited for as he meets his heroes of ages past, and finds happiness in the present.