After an intriguing first round that saw a few upsets and some easy wins, we take the Clash to the second round with a whole new slew of topics, and as always, new match-ups. This round will be another best of three scenario based upon the following topics for Round 2 - 1. Better President; 2. Worth paying to see live; and 3. The Dinner Test, who would make for the better dinner date.


Here is a look at the current brackets as they shake out. 1. Better President - Well, let's remove the glaring obvious that David Beckham cannot be President because well, he's from England. And honestly, neither can Batman because who knows what country Gotham lies in. However, we'll operate under the premise of who is more fit to lead a country. Batman isn't one for politics, but he just get's the job done. However, can you imagine a state of the union address by Batman? Wearing that outfit in the House of Reps? I'll go with Beckham here as he has the looks, the public speaking talent, the charisma, and a history of achieving goals throughout his career.  (Beckham 1-0)

2. Worth Paying to See Live - Beckham is an amazing soccer player. I've been lucky to see him in person in a scrimmage prior to the MLS All-Star Game. As for Batman, what he does is remarkable. I'd pay to see him destroy some of Joker's goons. Heck, I'd pay just to ride in the Batmobile. (Tied 1-1)

3. Dinner Test - Who would make the better dinner date? For the same reasons above, I don't see Batman being very talkative during dinner. Even as Bruce Wayne he has a very introverted personality. As for Beckham, it would be pretty cool to pick his brain on his life, on soccer, and other issues around the world. Highly interesting stuff especially for a man so well traveled. And how can we forget, Posh may even join him. Huge plus! Looks like last year's champ goes down to the Brit! (Beckham wins 2-1). 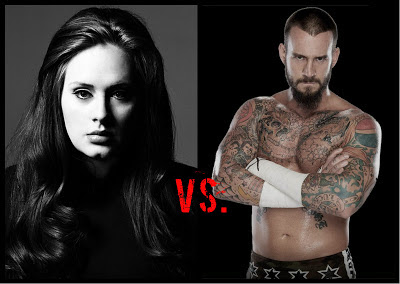 1. Better President - First, let me just say this is such a weird match-up. But hey, it's what makes The DP Clash so much fun. Same rules apply here from above for Adele, another Brit. Adele wins everything and is adored by everyone, but has a tendency to relay her political messages in a not so offensive way. As for CM Punk, he'll let you know what he thinks, and that is pretty much that. As much as it would be cool to have a President end a State of the Union with "Best in the World!", Adele gets the nod here. (Adele 1-0).

2. Worth Paying to See Live - Tough one. Such a tough one. While CM Punk is a great wrestler, Adele has one of those once-in-a-generation voices. Hard to argue with that, even if you are CM Punk. (Adele Wins 2-0) 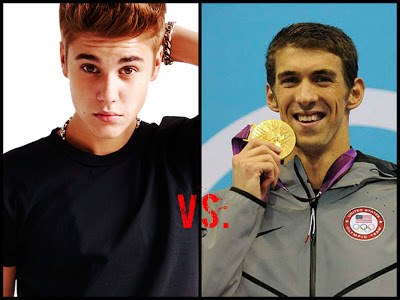 1. Better President - Wow, talk about star power here. Well, right off the bat I'll tell you that Justin Beiber would make an awful President, or Prime Minister (I keep forgetting he's Canadian) at this stage in his life. The guy has become in-love with himself - sorry "Beliebers". I would go with Phelps seeing as how he has already represented his country, and understands the importance of doing so. Would that little pot incident affect his vote? Sure. But I think he'd get elected and do a better job than Beebs. (Phelps 1-0).

2. Worth Paying to See Live - I have no interest in see Beiber live. And even if I tried to dig deep to find a reason, I can't justify giving him the nod over one of the greatest athletes to ever walks God's green earth. (Phelps Wins 2-0) 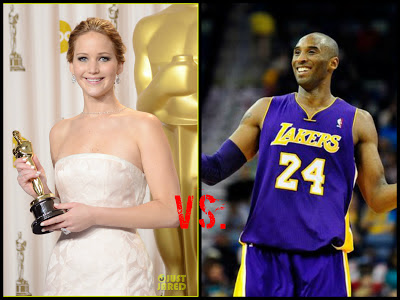 1. Better President - Kobe Bryant. No discussion necessary on this one. When the guy is motivated, he sets out to do it. Lawrence seems too bubbly. Great actor, but not the type to lead a country. (Bryant 1-0).