[Reminder: The selected topics for the first round: 1. Greatest Accomplishment 2. Most Likely to Lead in a Musical and the Man'ti Teo topic, 3. Least likely to have an Imaginary Girlfriend.] 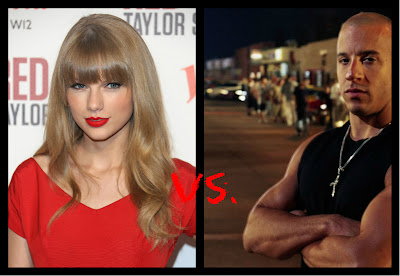 1. Greatest Accomplishment - Becoming a huge country-pop star for Taylor, against.... I guess what? Staying out of jail for Toretto? Owning a ten second car? Uh, yeah, I think I'll go with Swift on this one. (Swift 1-0).

2. Most Likey to Lead in a Musical - Another easy one as Taylor loves the spotlight and the stage. Last I checked, there aren't any ten second cars in musicals. (Swift wins 2-0). 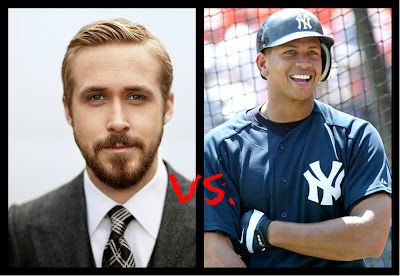 1. Greatest Accomplishment - For Alex Rodriguez, it's pretty much finally winning a World Series in 2009. Unfortunately, even that great accomplishment isn't enough to change his image. For Gosling, it's the adoration of many women, and jealousy of some men. And yeah, he's a pretty good actor. (Gosling 1-0).

2. Most Likely to Lead in a Musical - A-Rod isn't even convincing to himself, period. It's unfortunate, and that's the truth. A musical with him will most likely be met with boos and rolling of eyeballs. (Gosling wins 2-0). 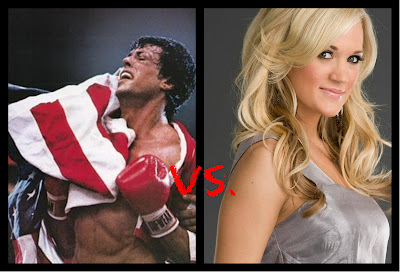 1. Greatest Accomplishment - Overcoming the big Russian name Ivan Drago, or winning American Idol? Have you seen Drago?! He would break you. Look what he did to Apollo Creed! Sorry, no amount of verbal abuse from Simon Cowell can match that. (Rocky 1-0).

2. Most Likely to Lead in a Musical - Rocky in a musical or Carrie Underwood. Seriously, this one needs to no explanation. (Tied 1-1).

3. Least Likely to have an imaginary girlfriend/boyfriend - Both pretty much have significant others, but at this point, Rocky has been punched so many times in the head (he never blocks), I wouldn't put it past him to make something up. (Underwood wins 2-1). 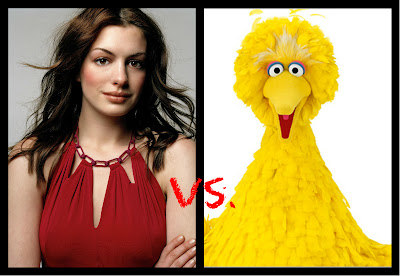 1. Greatest Accomplishment - An Oscar vs. hanging with Oscar the Grouch? (Hathaway 1-0).

2. Most Likely to Lead in a Musical - I know what everyone is thinking, this has to go to the talented Hathaway! Until we remember Big Bird has been doing musicals since the eighties, and helping kids read while doing it. Ohhh, take that Mitt Romney! (Tied 1-1).

3. Least Likely to have an imaginary girlfriend/boyfriend - So yeah, maybe Hathaway has had past fiances that weren't who she thought they were, but at least they were real. Who has Big Bird ever had? Actually, what is Big Bird?! ...Nevermind. (Hathaway wins 2-1).