Well here we are. After starting with 32, we are now down to four. Who will win? We'll decide in the best-of-seven with the following topics making the decisions: 1. Better Reality TV Show (Who would have the more interesting reality TV show); 2. Superstar Longevity (Who would remain a superstar the longest); 3. Most Likely to break a World Record; 4. Better Professor; 5. More Likely to Choke Under Pressure; 6. Most Likely to win a Gold Medal; and finally, 7. Least likely to end up in public controversy.

Should be an interesting final four with a variety of characters who have made it thus far.


Here is the updated bracket: 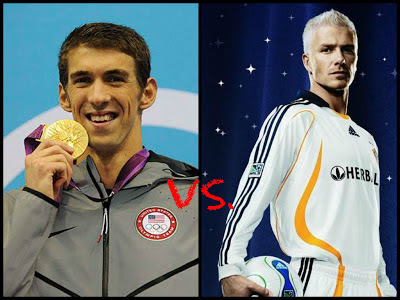 1. Better Reality TV Show - This one is easy due to one thing - bad timing. If this were prior to the Olympics, a reality show following Phelps' training, personal life, and his quest for history would have been amazing. Unfortunately, that is no longer the case. David Beckham is a superstar on so many levels. He has the life, the looks, the celebrity status, and of course, the wife. It's all the ingredients needed for reality television. (Beckham 1-0).

2. Superstar Longevity - This one is tough. Phelps has already retired, and Beckham is on the verge of doing so as he nears 40. The way I look at this is twenty-five years from now, Michael Phelps will be heralded in lore moreso that David Beckham will be. Awesome charismatic soccer players come and go, but there will be one Michael Phelps. (Tied 1-1).

3. Most Likely to Break a World Record - Ummm, do we really have to go through this one? (Phelps 2-1)

4. Better Professor - This is an easy one, as Phelps is still young, and quite frankly, inexperienced to really teach a classroom on life's ideals. Sure, he could teach or coach swimming, but lectures and inspirational speeches are the most he can do right now.  Beckham not only is a great athlete, but he's well-traveled, and a business man. He also has failed in areas in which he can use to help teach others. (Tied 2-2).

5. More Likely to Choke Under Pressure - The pivotal 5th topic, and this one is quite easy as well. David Beckham has come up short several times, including losing his cool in the World Cup and receiving a red card. A World Cup in which England had a great chance to win by the way. On the other hand, Phelps dominated every pressure packed situation he was put it. Simple as that. (Phelps 3-2). 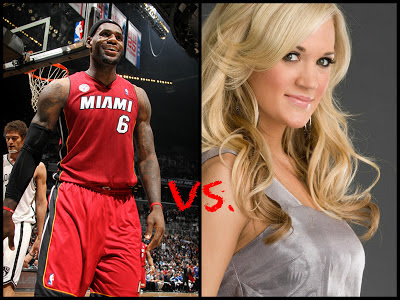 1. Better Reality TV Show - I want to say a reality show following LeBron would be interesting, but I really believe most people would end up rolling their eyes at it. Especially, after "The Decision". Carrie Underwood is solid, and she has a Hockey Player husband which is always a draw and on par with what reality shows require. (Underwood 1-0).

2. Superstar Longevity - As great and as "solid" as Underwood is in her talents, LeBron James will be talked about for years ad years to come. We STILL talk about Michael Jordan and he's been gone for quite a time now. LeBron will soon have the same legendary status. (Tied 1-1).

3. Most Likely to Break a World Record - The immediate answer would be LeBron, but if you take a minute to look at Underwood's album sales and downloads, she's on a pretty good pace to make some waves in the music industry. LeBron is more concerned with team goals, like rings, as well as he should be. (Underwood 2-1).

4. Better Professor - Do you really want to learn from someone that didn't go to college and rarely failed at making his dream a reality? Didn't think so. (Underwood 3-1).

5. More Likely to Choke Under Pressure - LeBron has been down this road, and up until last year, sort of had a reputation for shying away from crunch time. Underwood delivers. She did so under the pressure of American Idol, and continues to do so in all of her performances. I keep saying it, as it's true...Underwood is solid. As for LeBron, he choked here in the Clash...again.

#4 Michael Phelps and #6 Carrie Underwood is set for the DP All-Star Clash Finals.