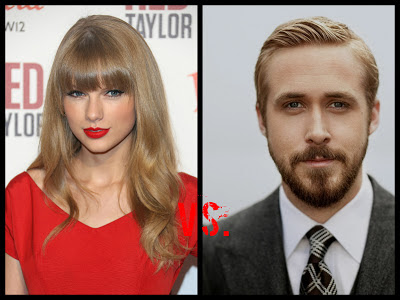 1. Better President - This one is very, very, very tough. Gosling is charismatic, good-looking, and could very well have some leadership qualities. In the very least, he'd act his way out as President and fake the whole thing without us even knowing. After all, he was pretty good in The Ides of March. As for Swift, look, she's already gotten to the point where many are beginning to turn on her. And quite frankly, she'd be that President that will always have a 50% approval rating. Knowing Swift's tendencies with her songs, after her term is over, she'd probably write a song about America. For the sake of Swift not becoming an enemy of the state, we'll go with Gosling here. (Gosling 1-0).

2. Worth Paying to See Live - I'm not sure if Gosling has ever done anything on Broadway, however, I'm not quite sure what else there would be for me to see Gosling do something live. Live interview? Maybe. At least Swift performs, and usually, her performances aren't that bad. (Tied 1-1).

3. Dinner Test - Dinner with Swift doesn't sound too bad. I'll like to give her the benefit of the doubt and say that she doesn't talk about her ex-boyfriends as much as she does in her songs. But, I think the child pop star entering adulthood phase never fairs well for anyone. Gosling might seem like the better dinner-date at this stage. (Gosling wins 2-1). 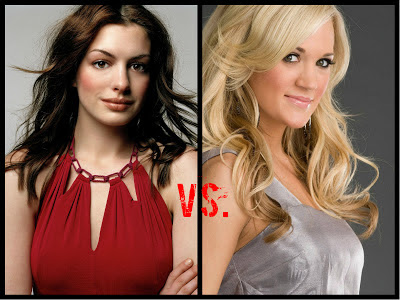 1. Better President - For me this is easy. Hathaway is going through "Swift syndrome" as talked about above in her career. It seems everyone is searching for a reason to dislike her. As for Carrie, she's perfect at this point. EVERYONE loves her. And heck, she's already won American Idol, which some might argue is harder that becoming President. (Underwood 1-0).

2. Worth Paying to See Live - Let me just say, both are beautiful, and you can't go wrong seeing either one live. However, as much as Underwood is a great singer and performer, Hathaway is a damn good actress. Admit it. Put your personal gripes against her aside if you have any, which has become a trend as of late. She is very good at what she does, and seeing Hathaway on stage live would be amazing. (Tied 1-1).

3. Dinner Test - Ooooh, a guy can only be so lucky to choose between these two to have dinner with. After trying to stay away from popular opinion, I have to cave here and admit Hathaway does seem a bit...well...un-real to me. I won't use fake, but she does have some A-Rod-like tendencies where it all doesn't feel genuine. Where as Underwood is about as transparent as they come. Dinner with Carrie Underwood. Sounds good to me. (Underwood wins 2-1). 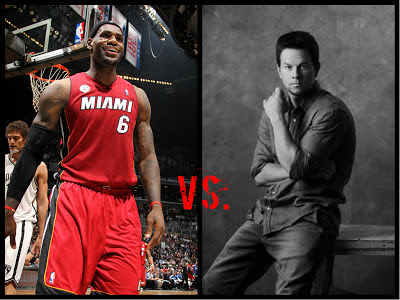 1. Better President - Talk about two guys who took awhile to realize who they were and what they wanted in life. Wahlberg acts like "Marky Mark" never happened, and LeBron ditched his hometown for a better (easier) path to success. Both are distinct qualities of being a politician. In the end, I believe Wahlberg may have the better chance as he's at least battled adversity at one point. There was a time where we all weren't sure if he would ever make it. LeBron, for the most part, has been in the public's eye since High School. Sometimes, that doesn't equate to making the right decisions. Especially in regards to an entire country. (Wahlberg 1-0).

2. Worth Paying to See Live - Another actor who is awesome on the big screen, who I wouldn't pay to see them do anything live. On the other hand, I could watch LeBron James play basketball everyday. (Tied 1-1).

3. Dinner Test - If I had dinner with Marky....er Mark Wahlberg, I'd probably just try to pry into his transition, one of which he doesn't want to discuss. Dinner with LeBron James would be pretty awesome. Who wouldn't want to find out the real reason he left Cleveland? (James wins 2-1). 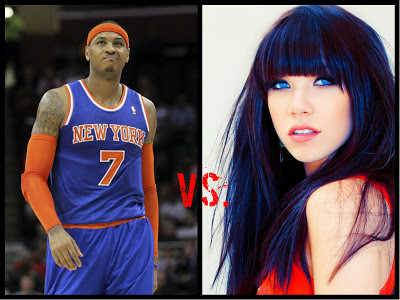 1. Better President - Jespen, another Canadian, would make a pretty itneresting Prime Minister, or President (if she were American). She's worked her way up through the ranks the way old school singers have - learning her craft, touring, and winning contests if needed. Carmelo Anthony on the other hand was fortunate that God gave him awesome basketball skills. However, Melo's resume includes leaving college early (with a poor GPA), and currently battling the stigma of not being a leader. Not something you want in your President...or Prime Minister. (Jespen 1-0).

2. Worth Paying to See Live - As much as Jespen is a good singer, she's not great, and not one that deliver's the now trendy "musical performance". Melo however, as stated above, is pretty darn good at basketball. (Tied 1-1).

3. Dinner Test - Both Jespen and Melo would make interesting guests for dinner. However, after really examining it, I feel like the more interesting conversation would be with that of Jespen on her sudden rise to worldwide fame. We've seen much of Melos career, and Jespen just has the more interesting story to take in at this point. If Melo brought along LaLa, maybe he'd have a shot. (Jespen Wins 2-1).