We're back with more of the 2013 DP Clash. The following round will determine the upcoming final four, and will be decided by the following topics: 1. Most Likely to take Over the World, 2. Better College Roommate, and 3. Ability to Be the Other.


Here is a look at the updated brackets: 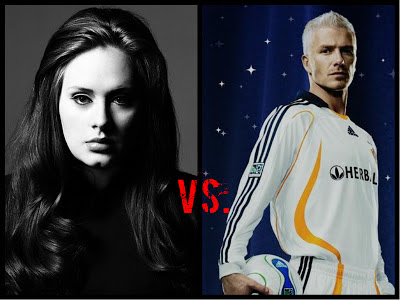 1. Most Likely to take Over the World - A battle of the Brits here...David Beckham has become popular through his celebrity marriage, rock-star good looks, and charismatic play. He's David Beckham! But his time has come and gone, and the potential to go further is over. Adele on the other hand is just getting started. If you haven't noticed, it seems like she wins something at every award show there is. And she's just beginning. Most likely to take over the world? At this point, we have to go with Adele. (Adele 1-0).

2. Better College Roommate - As cool as Adele is, I'm not sure if listening to her vent about her love life troubles and putting them into songs would be enticing as a roommate. She does have an interesting personality which offsets the romance issues, but rooming with Becks sounds pretty cool. (Tied 1-1).

3. Ability to be the Other - Such a hard topic, especially when it comes to these two who are known for something so different. Adele would never be as good as Becks on the pitch. Not that he has anywhere near the voice she has, but there have been bad singers who have made it work. We all can name a few. For that reason, Beckham is closer, and gets the overall nod. 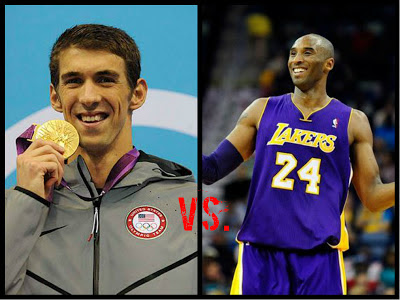 1. Most Likely to take Over the World - From the battle of the Brits to the battle of the supreme athletes...this one is a tad bit easy to rationale. Sure, Kobe is huge here in the States and very large in China, but Michael Phelps - well, he's already conquered the world - twice. Once in Beijing and the other time in London. (Phelps 1-0).

2. Better College Roommate - Kobe Bryant has been known throughout the years as someone that is introverted. Heck, in an upcoming book released by Phil Jackson, the coach states Kobe mostly kept to himself and rarely integrated with teammates beyond the games. Who wants to room with a person like that? Plus you know he'll want to compete with you at everything! As for Phelps, we've already seen enough of his party pictures. And the guy seems a bit more approachable. 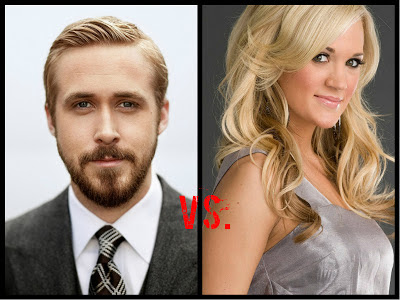 1. Most Likely to take Over the World - Gosling is interesting. The potential is there, but his competition among other actors of this generation is tough. Wahlberg and Bradley Cooper are two others he shares the spotlight with. He might have his time with a flurry of movies, but it's just limited to periods. Carrie Underwood right now is flawless. She's music's angel, producing hit after hit with a squeaky clean image. Plus, she has the tag of winning American Idol, which for some reason is a big deal. She's just a bigger star right now, and has done more. This one was very tough. (Underwood 1-0).

2. Better College Roommate - Personally, Underwood all the way (obviously). However, rationally looking at it from the masses perspective, rooming with Gosling would be more interesting as personality-wise he is more of an extrovert than the admittedly quiet and reserved Underwood. (Tied 1-1).

3. Ability to Be the Other - Another tough one as Underwood has acted before, and Gosling has a band. But here is how we'll decide it: Underwood appeared on How I Met Your Mother, and has already been penned to co-star in the musical re-make of Sound of Music come December. Gosling's band is called Dead Man's Bones. Pretty easy. Ever heard of them? No? Didn't think so.

Winner of the 10,000 Leagues Under the Sea Bracket: #6 Carrie Underwood 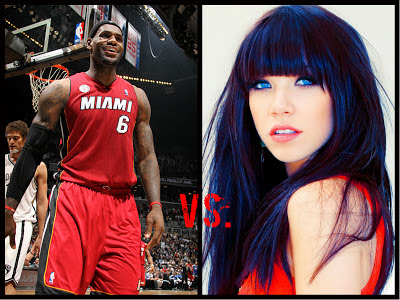 1. Most Likely to take Over the World - Sorry Carly Rae Jespen, you might have had a hit that took off here in the states and in rare places across the world, but LeBron James is a household name everywhere. Not hard at all. (James 1-0).

2. Better College Roommate - Well, LeBron never quite went to college. And if he did, after all of the hoopla he recieved coming out of High School, dealing with that ego might have been tough to share a room with...if there was room for you at all. Carly, you win by default. Could she continue the Cinderella run here in the Clash? (Tied 1-1).

3. Ability to be the Other - Nope. No upset at all. A LeBron James comes around once every twenty five years. And at this point, if he released an album or performed (like he did at the ESPY's one year), people would (sadly) eat it up. No chance Carly. None.