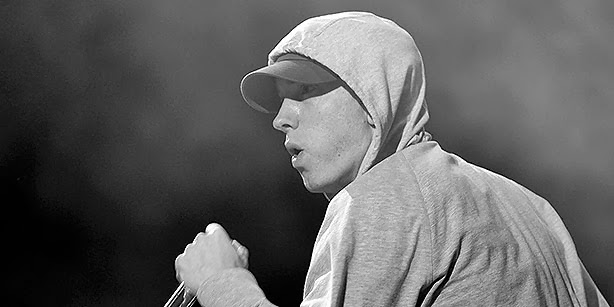 This is extremely late. I know. Believe me, I know. Because of my hectic work schedule, I wasn't able to listen to Eminem's latest album, "Marshall Mathers LP 2" until this past week when I had plenty of downtime on vacation. In fact, I listened to the entire album not once, but twice, from beginning to end over the last week. It's that good. And that's not counting the numerous times humming and reciting verses from the album.

Again, it's that good.

And that is saying something as lately I have truly become disinterested in rap and hip hop. Not because of age, but because the genre just feels overloaded with music that lacks soul. Music that stands for something. And that includes Jay Z's "Magna Carter - Holy Grail" (Disappointing in my opinion). And you can also put me in that group that found "Yeezus" by Kanye West to be highly mind-boggling, despite the rave reviews it's gotten from many music publications. But then again, music is subjective.


Along with Talib Kweli's "Prisoner of Conscious" album, MMLP2 is one of the few rap albums I truly enjoyed this year. Eminem's last album, "Recovery", wasn't exactly my cup of tea, but MMLP2 seems like a moral recovery - an extension and further clarity of his last album - that he needed to show.

Sure, Em is still voicing his controversial opinion on pop culture, and still ragging on the Backstreet Boys, and he is still throwing the occasional homosexual slur on tracks that hip hop is moving away from, but the rage, anger, and confused feelings of that very recovery he is possibly going through is very much highlighted throughout the album. And the aforementioned are most likely very much a part of that.

You still get that sense of the 41 year-old Eminem's struggle with thoughts through tracks such as "Bad Guy" and "Evil Twin", his reflection on battling his demons with "Survival" and "Monster", looking back on his relationship with his  mother (and follow up on "Cleaning out my closet") with "Headlights", and of course his future with a catchy track called "Legacy".

Oh, and for those who don't think Eminem still has "it", please - PLEASE - listen to "Rap God". It's just amazing, and will leave you knowing he still has it.

Also, the track makes for a great workout/lifting song. Just a suggestion if you're looking to add more songs to get you through that extra mile or rep.

Overall, the album has a lot of meaning and soul involved. I may not agree with all of his thoughts or lyrics, but Eminem lays himself completely out there. Just truth. And in my book, that's respectable, and a crucial element missing in rap today.

This album is no where near the greatness that was the original MMLP, but it serves as a nice follow up on many of the songs from that album all while coming full circle on the career that is Eminem.