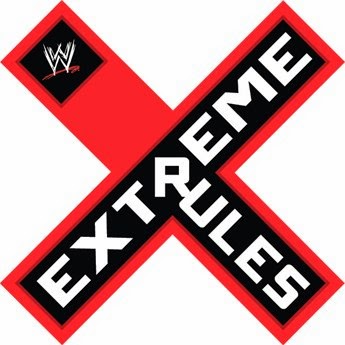 With the title of "Extreme Rules", a ruckus and hot New Jersey crowd, and the aura of hardcore expected on the show, heading into this show there was a slight feeling this could really be a lot of fun. Anyone remember the Monday Night Raw after Wrestlemania 29? A night that really jumped started the recent pro-engagement crowds we've seen as of late. As a New Yorker, I have to admit, Jersey started that. They deserve the credit.

Nonetheless, tonight had some moments which really helped serve as a catalyst for this crowd, and other moments that seemed like the WWE just tried way too hard. Of course, some, which outright made you wonder how much rope the WWE has with wrestling fans.


Either way, here are some quick thoughts from last night's Pay-Per-View:

- I absolutely love the pre-show and post show concept with the sports-style desk in the crowd. It's an awesome concept that makes the event feel big time, and also adds that level of over-analyzing, roundtable discussion and program focus that we see in other sports broadcasts. It's a great addition. Bravo to the WWE on this.

However, the presser with Daniel Bryan was a bit cheesy. Still a good idea, it just works better when it's a real presser, from people of interest. You know, like in Japan.

- The triple threat to kick off the show seemed to be a bit confusing, especially when Swagger was pinned, and the announcers thought it was a triple threat, and not the elimination concept it was. Either way, I didn't mind this opener.

But I will say this, how wrestling fans rip on other companies for being rip offs, yet Swagger has stolen basically all of Kurt Angle's move set is beyond me.

- I am very interested in the Alexander Rusev gimmick. C'mon, it's basically Ivan Drago from Rocky IV. And who doesn't like Rock IV? I'm just waiting for the "if he dies, he dies" line. Heck, have Xavier Woods do his Consequences Creed gimmick and...ahhh, nevermind. By the way, is Rusev now from Russia and not Bulgaria?

- I've always liked Wade Barrett and thought the WWE had something special in him since his Nexus days. To be honest, I thought Nexus could have been really special, but what do I know? I'm just a fan and a blogger. Either way, this match was entertaining, and it's good to see the Intercontinental title featured so prominently.

- The six man tag match between Evolution and The Shield has was a tale of two matches. The first ten minutes seemed rather blah and generic. Then that quickly spiraled out of control into a fun and chaotic second half. The all-out brawl in the stands was also fun, and the dive by Rollins off the arena entry tunnel was very cool.

The crowd loved it, as North East fans usually will let you know how things are going.

With the Shield picking up the win, I'm very curious to see where this one goes from here.

- I like the angle the WWE is going for with Bray Wyatt and John Cena, but the ending to this cage match was so odd. Oh so odd. I get the finish. I really do. Yet, the kids on Raw singing was awesome. This finish? Ehhhhhhh, not so much. After all, imagine if TNA pulled this ending off with the lights going off, a kid appearing, and the fall occurring shortly after? We'd hear the same ole tired complaints. "That's why this company will never blah, blah, blah"

The Jersey crowd, coming off the hot finish to the Shield/Evolution match, seemed to groan through the ending as well. But out of sheer disappointment. It seemed like this crowd was just waiting to explode for a reason. Any reason. This finish sort of let the air out of the building for the night.

WWE will get away with this though. Because, well...they are the WWE.

And by the way, did that kid remind anyone else of the Play60 NFL kid?

- I was hoping for an old-school "American Dragon" contest here, but this main event mirrored an old-school Hardcore Title match from the 90's. I was just waiting for Hardcore Holly to pop out of no where.

Nonetheless, the forklift addition was rather confusing. And it seemed like the Jersey crowd was too. It was part cool and part cheesy. As I write this, I still can't decide. But again, it doesn't matter, because WWE could get away with this sort of stuff. Again, can you imagine if we saw forklifts on any other company's pay-per-view? The WWE is so lucky it benefits from this double standard.

The match just felt like there was pressure to give the Jersey crowd something "Extreme", which is alright, especially since the match was indeed fun. However, I just hope Daniel Bryan doesn't become just a figurehead to spur "Yes" and "No" chants rather than seen from the WWE themselves and from casual fans as a guy who really could wrestle. Because lost in the whole "YES movement" is how tremendous of a wrestler he really is.

Either way, I enjoyed the show. It felt like the Jersey crowd wanted the night to be epic, but they instead got pulled down to having to accept what was an OK show with some cool, creative, and a few double standard questionable moments.