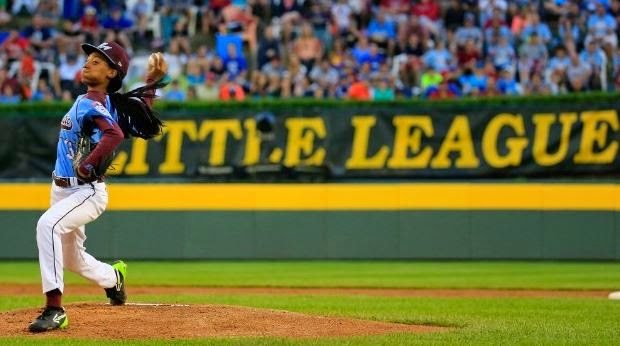 This post is a bit late, but better late than never, right?

Nonetheless, the sheer epicness that was the 2014 Little League World Series could not go by without yours truly dropping a few lines about it. Typically, as most of you DP devotees know by now, I am a baseball junky. I'm an addict. I admit it. I'm that guy that enjoys the Caribbean World Series in the midst of the winter months. I find the NCAA College World Series to be the best and most exciting sporting format in college sports. And yes, I enjoy the Little League World Series. All of this in addition to the normal MLB season. I like baseball, sue me.

However, this year's Little League World Series had a bit more juice than prior years. It crossed over from being an event for the die hard into having mainstream appeal. It was filled with drama, emotion, talent, and tremendous kids that made us fall in love with the sport of baseball all over again.

Not to mention, there were the story lines of girls participating in the LLWS in Mo'Ne Davis and Emma March. There was that awesome team from Las Vegas, Nevada. The exciting and must-see team out of Chicago from Jackie Robinson West. Tons of inspirational speeches from the mic'ed coaches. And of course, the remarkable and incredibly disciplined champs from South Korea.


Most of all, I walked away with several strong points from this year's LLWS that spoke volumes about the sport of baseball.

Baseball is Not Dead

Every year, when the grind of the baseball season begins to wear on the casual fan who awaits the start of football season, we hear the same old tired mantra, "baseball is a dying sport". It gains enough attention and becomes a "hot topic". Blah. To be honest, it gets old. Just my opinion. Just bloggin.

And while many tend to focus on the issues facing baseball more so than those which face or even plague the other sports and leagues (especially the free pass the NFL gets), the LLWS is a clear reminder that the sport isn't dead.

In fact, from the passion and global representation displayed year in and year out, it is clear baseball is a sport doing well in many areas around the world. Anyone else notice how much Australia has embraced baseball over the last decade?

How awesome was it to see the boys from Jackie Robinson West out of Chicago, Illinois? And let's just be frank, the fact that an all-black team is the best Little League team in the United States makes it an even better story. With the rapidly declining rate of blacks in the sport of baseball, their run really meant a lot to the overall health of the game.

Again, we constantly hear about "pace of the game" being baseball's biggest issue as one of those always-bantered about issues facing the game. However, while it is a big issue, the declining percentage of blacks in baseball is the biggest issue. For any successful product, you need the best athletes, and you need to continue to develop fans in all walks of like to support the product. For the past two decades, baseball has missed on both because the game has left out this once proud and historic demographic.

I've said for a long time, in order for baseball to continue to reach the black community, efforts like the Jackie Robinson West program across the country need to continue, and baseball needs to fill the void of having a face black kids can identify the game with. It's just human nature. It's tough for a kid to not see an faces like his own in his dug out, and in the ones on national television. Baseball's golden ticket would be for a black player to truly want to embrace that responsibility. Of course, the caveat being they must also be really good. No easy feat.

Nonetheless, it was nice to see the inner city (I'm starting to hate this term) initiatives paying off. Kudos to Commissioner Selig for his efforts in this matter. Here is to hoping incoming Commissioner Manfred will build upon this, and take it a step further.

[side blog: Nice touch by guys like Torii Hunter, Curtis Granderson, Carl Crawford, and others who paid for the travel, lodging, and food for the parents and family of the Jackine Robinson West kids. It was vital for them to be in the stands, and they knew how important this was. Again, kudos to those fellas.]

Ahhhhh, here we go. I'll be short on this. I truly believe the "pace of game" issue in MLB is not a difficult or complex issue. The College World Series and the LLWS games move along nicely because hitters stay in the box, pitchers deliver pitches at a reasonable pace, and players hustle in and out of the dug-outs. You know, the way we all grew up playing the game.

It drives me absolutely crazy to see a hitter take a pitch, step out of the box, walk back toward the dugout, adjust his equipment, possibly twice, slowly walk back to the plate, dig in, and prepare for the next pitch.

Mo'Ne Davis is awesome. I said it on Twitter, and I'll say it again. A.W.E.S.O.M.E. The girl has so much toughness, poise, and fight in her, it was hard not to root for her. Of course, the fact that she is a girl, a black girl nonetheless, added to the empathy of the situation. It may sound sacriliegous, but from her interview with Karl Ravech on ESPN, she reminded me of Derek Jeter a lot.

Regardless, the idea of a woman one day playing in MLB doesn't sound all that crazy. And while there are some physiological hurdles that may limit this, the pursuit of such an achievement would be ground breaking. A feat no other sport, besides probably soccer, could provide.

I honestly believed, and still do, that if we ever see a woman in the show, she will be a pitcher.

Baseball is a World Sport

Watching kids from countries such as Australia, South Korea, Canada, Japan, Venezuela, Mexico, Czech Republic, and Puerto Rico speaks volumes about the game. Baseball is growing folks. Squash all the doom and gloom talk, the game is healthy and simply in need of some tweaking.

Sure, I have an unhealthy baseball man crush on Mike Trout. The dude is good. Like, really unbelievable. Stupid good, actually - for lack of a (much) better phrase.

But, how about all of the kids who answered that traditional phrase of  "my favorite baseball player is..." with Mike Trout?

Baseball has something really special in their sport. I just hope they capitalize on it.