A Suspect When You Don't Even Know You're One 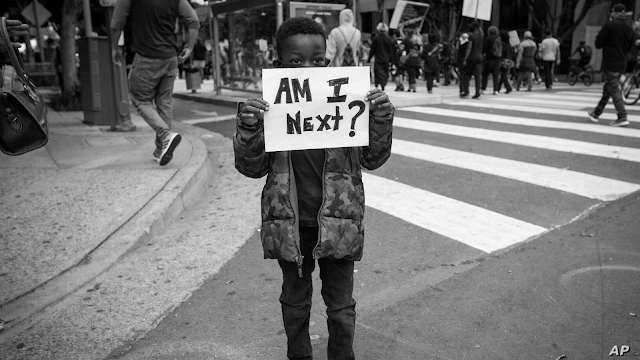 I was riding my bike across a major street in my neighborhood and began picking up speed as I knew my friend's house was a mere few blocks away. I was en route to return a video game he loaned me earlier that week. It was summer, and with plenty of time during summer vacation as a freshman in high school, playing video games and borrowing/sharing them with friends was ideal.

After crossing a major street, I heard a quick siren and a voiceover urging someone to pull over and stop. Wooooooop Wooooooop!! Pullover immediately! I quickly turned back and noticed the officers pulled over on the corner and gesturing for me to return to their vehicle. Slightly confused and partially intrigued, I did. I rode back towards the vehicle where the officers were waiting.

"Where are you headed?"

"Where is your friend's house?"

"East 85th Street. A few blocks down that way", I said, pointing in the direction I was previously headed.

"Where are you coming from?"


"My house. Right down there, East 91st Street.", I said nervously, pointing beyond their car in the other direction. The constant questioning along with their tone began to worry me.

"OK. OK.", says the officer in a tone that leads me to believe that my story and responses made sense. In a way to make me know, that he knows, that I'm not lying. Which of course, at the time, was a very, very big deal. And very much still is. I've seen these instances go tragically wrong for no reason too often on my television. Heard my parents sternly (pleadingly) repeat (and repeat, and repeat) the things I should do upon encounters with police officers as they too watched the grim news. The things they had me sit down and absorb much earlier in my life as a rite of passage.

"What do you have under your shirt?", he stated much more forcefully than the questions before.

I reached for the video game I had conveniently (for me at least) tucked in the front part of my shorts. Under my t-shirt. You know, the days before someone cleerly came up with the idea to add pockets to basketball shorts.

That's all I heard which froze me. I knew those very words from TV shows I've seen too often. I knew what they meant. And this was also part of the toolkit presented to me in that very talk. Shook, I just couldn't remember where. I prayed to God that this situation wasn't as serious as it seemed like it was quickly escalating to. I also hope no one on this busy street was looking, or even recognized me in this predicament, one I have no idea why I was in.

I looked up and the officer had his gun drawn. It wasn't directly pointed at me in the manner of me being able to stare down the barrel of his weapon, but enough to startle and scare the you-know-what out of me.

"LIFT. YOUR. SHIRT. SLOWLY!" the officer belted from the passenger seat still with the weapon in hand. The other officer, now opening the door on the driver side to make this offensive stance known as he rested one hand over the roof of the car and piercing me with his eyes and forcing me to wonder where exactly his other hand was.

I did what he said and slowly lifted my shirt revealing the object - Sony's Gameday '99 for PlayStation. Even though I saw his face reveal that the situation was no longer as tense and threatening as he anticipated, I even pulled it out and slowly handed it over to him. He opened it, removed the CD, looked through the casing a bit, and then asked if it was a good game.

Again, still, a bit shaken, I managed to say, "Uhhhh, yeah, sure". At this point, I'll agree with anything positive and polite. Just let me go. Just don't let me die. The other officer then started saying something about his kid and that very game, but at this point, I didn't hear any of it. I wanted to just leave the situation hoping no one saw this and looking forward to never being in this situation again.

The officer handed me the game and attempted to put me at ease, possibly due to the potential scarring of the very moment written all over my face. It felt partly genuine and partly patronizing.

"We received a phone call of a robbery of a woman by a young man - same build and same description (gesturing towards me) - who mugged a woman at gunpoint for her purse and was said to have been seen getting away on a similar bike like the one you're riding."

And I'll never - EVER - forget his next statement to me.

"Unfortunately kid, you're sometimes a suspect when you don't even know you're one".

Did he mean this for everyone, or...people like me?

I rode away that day and carried on with that very incident in my mind. I returned my friend's game and even returned to my block for a game of football without telling anyone what had just happened. No one. I kept this incident pretty much to my self sans a few individuals later on in life. Until this day, not even my parents know about this occurring.

During a time where the issue of young black males and their inexplicable deaths by police officers remains a hot button topic within social change and social justice, I am reminded of this very moment that took place when I was a mere fifteen years old. Luckily for me, nothing fatal or rather serious came of my experience.

There are so many angles to look at these situations that become mainstream news with social and political waves. From the outright racism and/or stereotypes that clouds each situation, to the blatant mistrust of those who have sworn to serve and protect us within black and brown communities - there is so much to unpack. Even the forgotten perspective of the good police offers who risk their lives to do their jobs, and the "bad apples" who somehow get labeled a sweet gesture and are allocated and labeled as "individuals performing subpar" rather than the destruction to human lives they are and have been. It really is all a big mess.

I'm hoping one day, and I'm sure it'll be well after the good Lord calls me home, that the narrative on these issues will be altered. Until then, I'll continue to be baffled, dumbfounded, and heartbroken over these situations. The heavy layers of understanding what it's like growing up as a young male of color in the inner city who struggles with trusting those who should protect and serve; the hyperbole and ineffectiveness that spews from today's "civil rights leaders"; the constant inaction of the white community who can be a life-changing ally at any time should they choose to; and of course, without a doubt, ultimately feeling for the parents and families of the victims we mourn every time these situations come about.

What that police officer said to me almost fifteen years ago was so right. Oh, so right. You just never know when you're a suspect...it's just unfortunate that lately we are reminded that we don't know when we'll be the next victim as well.