I would choose dark blue and light blue, with white being a given color. I would choose a cross bar along with a old-English style cross in front of it. Because there are sites out there that allow you to actually design your own flag, I messed around and brought my vision to life. 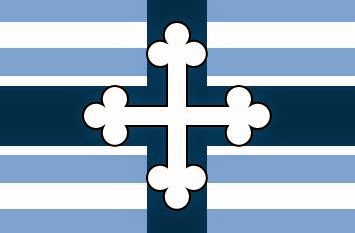 423. If you had to identify the worst hotel room you have ever stayed in, where was it?

Oh, this is quite easy for me. While my trip to Italy did include some tiny rooms, bathrooms, showers, and some other inconveniences not suitable or accustomed by Americans, nothing will ever compare to a Washington D.C. hotel I stayed in during my college baseball days. Roaches, a mice, drug deals, and I'm pretty sure prostitution was rampant throughout the night. VERY sketchy building, scene, and area.

Oddly enough, my recent trip to DC included one of the coolest hotels I've ever been in, "The George."

424. If you had to name the most important invention in history, what would win?

Wow, this is extremely hard. Right off the bat I want to say the computer, as I can't even imagine life without modern technology. Also the wheel comes to mind as well. However, I'll stick to my guns on my original thought and go with electricity. I'm sure that change the game for many facets in life.

425. If you had to choose the best song ever composed, which one would it be?

Wow. Too hard. No matter what I answer with, I'll come up with something else and wonder what  was thinking at this exact moment. I'm going to go cheat and go with three songs that immediately come to mind, "Imagine" by John Lennon, "I Can Only Imagine" by MercyMe, and "Everlong" by Foo Fighters. I'm going with these three just on the sheer quality of the writing involved in the lyrics. All three songs evoke deep and interesting thoughts amid the music.

426. If you could solve one unsolved crime, which one would you solve?

Another tough one - first thing that came to mind was the unsolved murder of JonBenet Ramsey.

427. If you could win any competition in the world, what would it be for?

American Idol or The Voice, or one of those other crazy singing competition shows would be tremendous because I absolutely cannot sing. But as someone who enjoys the sporting world, winning a Crossfit competition would be awesome. Again, another win very unlikely, and would probably be a miracle.

428. If you just learned that you had exactly one year to live, what would you do with your remaining time?

Travel. I would quit my job, pack my bags and my laptop and go see the rest of the world. Possibly penning a "final season" so-to-speak of Dome Pondering.

429. If you could break one current world sports record, which one would it be?

All-time Home Run record. So there would be no more controversy.

430. If you were allowed to eat only one vegetable for the rest of your life, which one would it be?

Broccoli. Love them. And they go with plenty of meals.