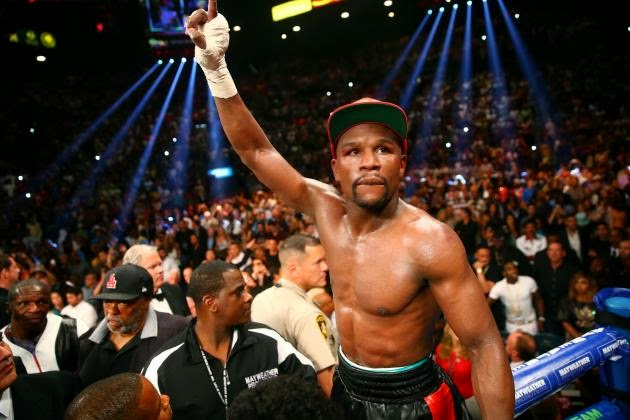 It felt like a huge step forward to the fight we all have been anticipating for years, yet, it's still feels like the same song and dance - talk, talk, talk, jabber, jabber, point finger of blame, and well, repeat until it all fades away with no fight.

So sure, Floyd Mayweather called out Manny Pacquiao - again - for a potential fight on May 2nd. It's more than Mayweather has given since an initial fight fell apart over drug testing protocol and possible purse money for each. He even gave an official date in his issued challenge. Big talk!

The truth is, as we all know, this fight is well past the height of maximizing it's potential. Of course, Mayweather vs. Pacquiao would still do the highest grossing business in the history of the sport because we're all still very much intrigued by the possibility and the idea of what we never have received.

My biggest cynical feelings behind this are the first and obvious - boxing continues to hurt itself with this fight, and other fights that never occur. The sport is so corrupt and has become the wild, wild, west, with titles not meaning anything because there are about 345,568 of them (yes, I'm exaggerating), and various television partners and external camps controlling much of the business of the sport. I've said it in the past, I would love to see a gutsy promoter start a governing body and sign boxers under such an institute ala Dana White and the UFC.

One of the reasons for the growth of MMA is that the sport gives fans the next big fight immediately. There isn't any waiting, delaying, arbitrating, or semi-decision making that we get from boxing. The sport is floundering from this as boxing still pulls very healthy numbers. However, the days of boxing being mainstream are over, and let's be honest, regardless of how HBO and Showtime want to spin it, pay-per-view numbers are falling drastically in today's subscription-demand-based market.

The other feeling that arises from this situation is the very legacy of Mayweather. Regardless of how you feel about the guy personally (I admit. He's super arrogant), he is a pretty damn good boxer. When you watch him in the ring, it's quite comical how fast he is, and how much he frustrates opponents with his elusiveness.

Yet, regardless of an undefeated record passing and the obvious eye test in being the greatest ever during this generation, with each passing fight, the cloud that is the Pacquiao fight continues to move in to hover over his entire career accomplishments. Mayweather's the best? Come on, he dodged Manny Pacquiao for years! Sentiments heard and have been growing for too long now. Mayweather now has no where to turn with falling demand for his fights and no one left on the board to dance with for a big pay day, which is a shame. A man of Mayweather's talents, ability, and overall legacy, shouldn't have to resort to such options.

So yes, the challenge has been thrown out there for May 2nd. Ehh, big whoop. Until this deal is signed, all it is, is more empty rhetroic from everyone involved. More blown smoke from boxing. And more disappointment for fans of the sport.